With thanks to Jim Blanchard for permission to use the following from his web site.

'Briggo' or Barry Briggs - four times world champion. Barry was born in Christchurch New Zealand, on December the 30th, 1934, and was a very nervous novice when he arrived to join the celebrated Wimbledon team in 1952. Yet in just 21 years, he had won every major honour in the sport, including the world individual final in 1957, 1958, 1964 and 1966. An admirer and friend of another New Zealand wonder kid; Ronnie Moore, who had left New Zealand to ride speedway in the UK and had immediate success. Ronnie had qualified for the World Final at Wembley in his first season. 'Briggo' soon acquired a machine of his own after 'hiring' a bike in return for assisting others at his local training track, and he was then soon on his way to fame and stardom. 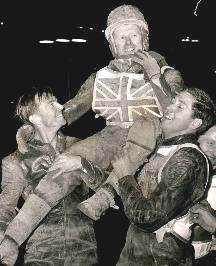 Photo at left is Briggs,  Ronnie Moore and Peter Craven after 1962 World Final. To achieve these honours, Briggo has had to surmount many obstacles, from parental opposition, through the troubles and the traumatic times, when it seemed that he never would master the art of staying on the bike, let alone win anything. Injuries, upsets, and sometimes tragedy have dogged his career. Though the determined character, which is the make up of champions, had always been in evidence. Arriving in the UK, he began his career riding for the London club Wimbledon, with his friend Ronnie Moore now a team mate. Barry stayed with Wimbledon for 7 years. During this period he won virtually everything that the sport had to offer. When the English season would finish he would continue racing and honing his skill by going off to South Africa or New Zealand over the winter months. On his return he would be on top of his form for Wimbledon and his English fans. 1957 brought his first Individual world championship at Wembley which he was able to repeat the following year, in 1958 - back to back championships. 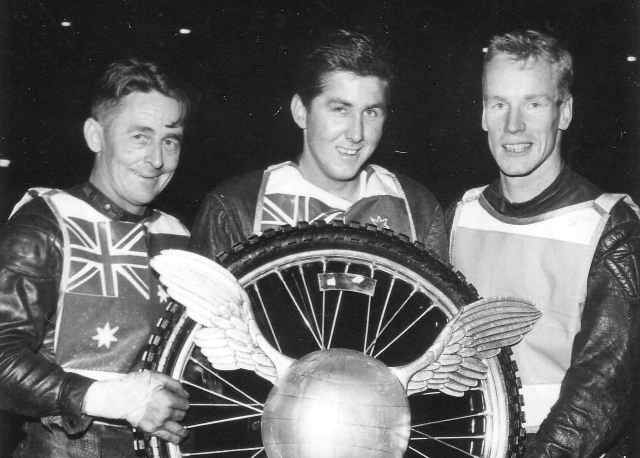 1958 world final top three at right. Winner Barry Briggs, centre with Ove Fundin (right, Sweden) and Aub Lawson (Australia).  He eventually left Wimbledon after threatening not to return to the UK at all if he was not allowed to move to another track. He joined the New Cross team which was just across London from Wimbledon. Though popular there with the Rangers fans his riding style did not suit the tiny 'frying pan' track and asked to leave after only one season. He then moved down the road south to Southampton and loved it. During the 1963 season it become known that the Southampton track was going to be sold for development. Being very content with the situation at Southampton Barry had to look for another team once again. There was talk of him returning to Wimbledon but that was out of the question. Barry has been quoted as saying he would have preferred to retire than to return to the Wimbledon track at that stage of his career. The closest local track for Barry was Swindon, though whilst not being as close as Southampton, at least it was in the same part of the country as his home and business interests. He got on well with the Swindon riders and organisers and so that was that. Briggo became a Swindon 'Robin'. The 1964 season ended with Barry Briggs, Swindon racer, becoming World individual speedway champion once again, this time at the Ullevi stadium Gothenburg Sweden, for the third time. Barry was able to win the World Championship again for the forth time in 1966, again in Sweden, as most of his rivals were from Sweden. Barry sure liked to rub it into them on their own turf. This time was unique, as Barry was using a new Czechoslovakian machine, the ESO which became eventually known as the Jawa. Barry Briggs was the first rider to win the World Championship for the Czech Jawa company. This was to be his last world championship win. At Wembley for the 1972 world final Barry was still riding at the highest level and was after that fifth championship title that was currently only held by Ove Fundin. After impressively winning his first ride, he tangled with two Russians in his next ride of the night and crashed heavily and subsequently lost his index finger. That was the end of the nights racing for Barry and and the dream of that elusive fifth world championship crown. Talk of retirement was again inevitable but he was persuaded to return once again to his old team Wimbledon which was now being run under different management. He still maintained a healthy 9 point British League average and was always there or thereabouts in any league or individual competition. Barry Briggs was still a hard man to beat. He was also busy looking after his business arrangements and often commentating on the sport for television companies. Barry, together with fellow New Zealander and six times world champion Ivan Mauger, formed World Superstars Inc, a troupe of world speedway champions, putting on race meetings that also included multi world champions Ronnie Moore and Ove Fundin, all around the world. Barry Briggs was talked out of retirement once again and rode another full British season for Hull Vikings in the north east of England. He finally retired from competitive speedway racing in 1976 but was still involved in his troupe of the World Superstars with Mauger & Co, taking part in demonstration races and continuing to running his business interests both here in the UK and the USA. During his career he was also honoured by her Majesty the Queen for his services to the sport.Most World Speedway Championship Finals Barry Briggs reached the finals a record 18 times - from 1954 to 1970 and in 1972. He won the world title in 1957, 1958, 1964, and 1966, and scored a record 201 points in 87 races.