Wayne Briggs was the youngest of the Briggs family, born in Christchurch, New Zealand on 24 June 1944, ten years after his elder brother Barry. Before leaving for the United Kingdom he had ridden in some scrambles but he had never ridden in a speedway meeting.  Murray Burt remembers seeing Wayne and his mother at Aranui meetings in the late 1950s, but Wayne was too young to ride there.
He arrived in England in 1961 at the age of 16 as a cheery crew-cut teenager hoping to emulate his brother's achievements. Johnnie Hoskins was interested in him and invited him to a trial at New Cross.  In his autobiography, Barry says that Wayne's trial lap times at New Cross were only about half a second slower than some of the more experienced league riders. After signing him Johnnie Hoskins decided that it was better for Wayne to gain some experience in the Provincial League so he loaned him out to the Edinburgh team which was managed by his son Ian.  Experienced Dick Campbell and young Alf Wells were also in the side so there was quite a strong kiwi influence.  Brother Barry also arranged second half meetings for Wayne at Southampton, St. Austell, Poole, and at Shelbourne Park in Dublin. Barry's theory was that the experience on the different tracks would speed up his progress.  Wayne settled in quickly with the Monarchs and his final average for the first season was just under 6 points. At the end of the year readers of the Speedway Star voted him the year's "Most promising Novice," ahead of Terry Betts and Eric Boocock.
He missed the start of the 1962 season due to an eye operation but returned to the action in June and went on to have a great season. He won the Meadowbank qualifying round of the World Championship with a maximum 15 points and he won the Scottish best pairs championship in partnership with Alf Wells.  At the end of the season he finished second in the Provincial Riders' Championship to Len Silver.  During the UK winter Wayne returned to New Zealand where he rode in the New Zealand speedway championship at Palmerston North and finished 6th. 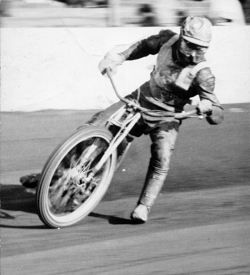