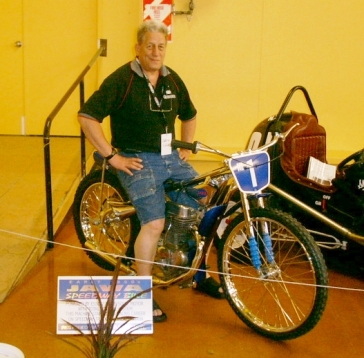 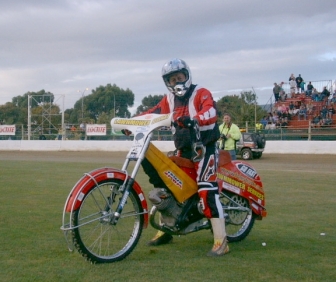 This story adapted from an article in the NZ Herald on Feb 3rd. 2006.

Bruce Cribb is of New Zealand origins, and played his part in one of this country's finest speedway moments.
It's a different story concerning his speedway bike, though – it was built to race on ice, yet at home on the dirt in Cribb's expert hands.
The 59-year-old Bruce, who won a world dirt track title alongside the legendary Ivan Mauger in the late 1970s, has lately called himself  'The World's Fastest Maori'  With his 500cc Jawa machine, he is confident he'll smash the Rosebank,  Auckland  track record as he did in 16 out of 17 attempts at British tracks.
Bruce says: "I was in the world top 20 for ice riding but a lot of those guys were way ahead of me in skill. Yet they have tried this in Sweden and smashed up big time. I don't know why."
Bruce, whose late father Kiwi was a national speedway champion, was raised in Palmerston North before heading overseas as a teenager to pursue his career.  In the mid 1970's he answered an advertisement placed by the British speedway control board looking for riders willing to have a go at ice racing, whose strongholds include Sweden, Holland and the old Soviet Union territories.
This took Bruce deep into the old USSR to Ufa (now the capital of the Republic of Bashkortostan), about 1000km east of Moscow. It was a world away from the sort of riding Bruce was used to in Europe. Temperatures dipped to 40C below zero, the heated pits were located under the grandstand, ice walls instead of straw bales surrounded the track.    Bruce went on to pursue a dual career on traditional and ice tracks before he quit both in 1988.  Head injuries from a horrific accident cut short his 1987 season to just one match, and although he bounced back to qualify for the 1988 World Individual Ice Final, he rode only a handful of matches for Exeter averaging 3.24 from only 8 appearances. That was to be his final season before announcing his retirement, and Exeter staged a benefit meeting for him in 1989 in the shape of the Bruce Cribb Farewell Fours. Having reached the finals of the World Ice Championship, Bruce was plagued by his injuries, and only managed to make joint fourteenth. These re-occurring problems, were to finally bring down the curtain on his long, conventional racing career in 1988, following his request for a months rest following a meeting with Arena Essex.
Bruce, who lives in Birmingham, England, managed to win a New Zealand title but rarely returned here otherwise. He was persuaded out of retirement to demonstrate the ice bike at the 75th anniversary of the Palmerston North, (NZ) track nearly a fortnight ago.
The obvious difference between the ice bike and a normal bike are the 5cm spikes protruding through the tyres - 240 of them on the drive wheel and 120 on the front. The powerful grip allows Bruce to reach amazing speeds on tyres pumped up to 55 psi.
Bruce says: "There are no spikes on the side of the wheel. The spikes actually flex over into the track - you can go around a corner absolutely flat. Your hands touch the ground sometimes."
The ideal time to ride is after other events have cleared the top layer of loose material, giving the spikes a hard surface to bite into.
The most famous of New Zealand bike riders is former world speedway champion Ivan Mauger. Along with Mitch Shirra, Larry Ross, Mauger and Cribb secured New Zealand's only world team title in the 1979 finals at London's White City.