When the newly formed Paisley Lions announced their latest signing, Mike Fullerton, in the Spring of 1975, there were a few eyebrows raised, given that while the Kiwi had some British League experience with the Bradford Barons from an earlier excursion to these shores, he was a relatively unknown performer at a juncture when the fledgling Lions were about to enter the National League for the first time, and when there were maybe better known Kiwis around in the mid 70’s..     In actual fact, the signing of Fully proved to be a masterstroke on the part of promoter Neil McFarlane, as his electric gating proved to be a regular points winning feature for the new Scottish team who, while lacking a genuine no 1 capable of scoring 11 and 12 points per meeting, nevertheless, relied on solid scoring throughout the side to stack up regular wins at the 391 metre track in 1975.     Fully was a main attraction in that first year team, coming in with a 7.41 average at the end of the season, a highly satisfactory return for a rider who had joined a brand new team and who was required to score solidly for the side in their embryonic first year.      I got to know the man quite well for a number of reasons. As the club statistician, I was responsible for keeping the team stats up to date, and my first greeting of “What’s me average?” from the Lions’ heat leader each week, let me knowIw as in his vicinity.  Secondly, and of equal importance, given his geographical location, as one of his many willing Scottish hosts, it was absolutely imperative that he learned of our sometimes quaint local customs, normally associated with glasses (not spectacles), and I took it upon myself, with the considerable assistance of another notable Kiwi, John Wells (our then Track/Team Manager), to educate him in the finer arts of developing fine Scottish liqueur based beverages. I am pleased to report he was a very willing pupil who demonstrated considerable aptitude in this field-indeed, if it had been an examinable subject, I would have had no hesitation in awarding him an A+!     Anyway, getting back to the speedway content of this piece, Mike was a well loved “Love Street Lover” (a name given to any fans or riders showing a dedication to the cause in that first season), and it was a major surprise when we learned that Fully was not pencilled in for an immediate return to Paisley in 1976. The reasons for that management decision were never made exactly clear, but when the Lions had an absolutely disastrous start to the 1976 season, not winning a home match until two months into their season, the call went out for Fully to come to the rescue (cue music from the film “Superman”).     Because of falling crowds (no doubt arising from a regular diet of home defeats early on), Lions were struggling to bring in any rider capable of helping to halt the slide, either because they were already with another team, or because the cost of bringing him in was prohibitive. Cue the fanatical Paisley support-on learning that the main barrier to a return to Love St by Fully was the cost of the air fare, they immediately struck a deal with the promoter to stump up a very large proportion of it, and well before the conception of “air miles” was introduced, within a week, he was back within his adopted family and within his spiritual speedway home.     The Lions’ fortunes picked up considerably after that-remember, Fully was returning to the UK in the middle of the NZ close season (i.e. with no practice and just off a plane) but his mere presence, coupled with a significant bolster to the points scoring columns, ensured that the Lions’ faithful got a better than even return from their investment in the ensuing few months of the season remaining.      The story for the Lions doesn’t have a happy ending, in that in spite of Fully’s return to his spiritual home in 1976, the club couldn’t overcome debts which prevented it from competing in 1977 and thereafter. However, his performances in the West of Scotland encouraged a nearby club (in the shape of the Berwick Bandits, a club who to this day compete in the British Premier League, and who consider themselves to be Scottish in every way except geographical accident, being maybe only 3 miles on the wrong side of the English Border) to sign him up in the latter part of the 70’s and who in doing so continued to demonstrate just how good a rider he was at that time. Indeed, (and I can vouch for the authenticity of this statement as I was the timekeeper when it happened), he actually broke the track record at Paisley, a fairly significant achievement in its own right, but he did it in the second half of the meeting (ie after maybe 13 heats, when the track was not at its best), at a time when luminaries such as the then (and in my opinion still) greatest rider the world has ever seen, Ivan Mauger, was unable to better his track record of 72.4 seconds for four laps of the the 391 metre circuit.      In corresponding with Mike recently, when I was letting him know that the track and stadium at Love St in Paisley was no more after 115 years, we both agreed that in many respects this gave him a notable claim to fame, and it’s one of the ways in which people can remember him-after all, it’s not so many who can say they were the fastest ever to go round anywhere in a period covering 3 different centuries!

Cheers Mike! If I ever catch up with you again in the flesh, the next one’s on you! 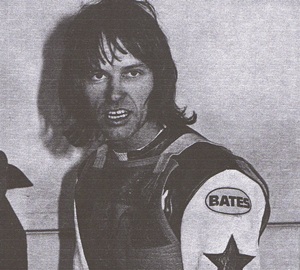