Kevin Hayden  (Haybags) Currently living in Lower Hutt, New Zealand.        Return to Personalities. Kevin rode at Taita speedway and other speedways in New Zealand and England, plus he was very active in many other forms of motor cycle racing such as beach and grass track, hill climbs and scrambling. Notes from a discussion with Kevin. May 2005.

Towards end of first season in England broke both arms about a fortnight after breaking track record. He stayed over in England and had a chance to do a tour to South Africa, but his injuries ruled him out of that. He was also offered a spell at ice racing, but was not so keen on that. Bruce 'Kiwi' Cribb did take it up however. He did get to the second round of the world championship qualifying but the broken arms put him out of that. Became an ACU steward after his riding days were finished. He spoke of problems at tracks where stock cars preceded motor bikes, as the track was usually littered with all manner of items from the stock cars that could be a danger to bike tyres and riders.

INTRODUCING KEVIN HAYDEN   (from a Cardiff-Wales 1952 speedway booklet)       I feel that supporters will want to read the story of at least one of the riders. Because he is the youngest member of the team, I feature popular New Zealander, Kevin Hayden.  Hayden, although only twenty two years old, has a useful string of achievements to his credit.       Born in Wellington, N.Z., he was brought up in an atmosphere of speedway, with his brother Frank, the eldest of three brothers, Kevin being the "babe" could always be found hanging around the pits at Kilbernie track. It was Frank who took young Kevin along to Kilbernie in1938, where he saw Van Praag, Wally Kilminster and Tim Wilkinson (who was later to become his favourite) in action. On the spot he decided to aim high and carve a niche for himself in the speedway world. Kevin's first real move in the speedway direction came at the age of 14 when he left school and com­menced taking part in sports trials, hill climbs and scrambles. During the day he was employed as a mechanical assistant in a local garage and the motor cycle he used was a normal model.  About this time he joined his first motor cycle club--The International Motor Cycle Club of Wellington. (later named Ixion)      He rode for this club against the inter-provincial teams, Auckland, Palmerston North and Christchurch. Kevin's initial introduction to speedway came in late 1948. It was at a grass track meeting at Wellington and recognised speedway riders were out.      He decided to "have a bash" and successfully persuaded a reluctant Chinaman to lend him his machine. The bike was a Harley-Davidson Model-known to the boys as an "old peashooter."       Kevin did well enough to merit an invitation to join the Hutt Speedway Team. A new machine became a pressing need so Kevin made himself a model with a Norton engine and a Wallace frame.       Hayden's first year was successful and his brother Frank advanced the money for him to purchase a  J.A.P. engine. Kevin's first taste of team riding came when he was partnered by Peter Dykes in friendly matches. Promotion to the first team followed and he rode regularly until March 1951 when he was invited by Leslie Maidment to join Cardiff  "Dragons."      His fare paid, Kevin flew from Wellington to Auckland where a plane waited to fly him to England in company with Mick Holland and Split Waterman.  It is interesting to note that Kevin won the Wellington Speedway Championship in 1949:  His team-mates at Hutt included Split Waterman (Harringay), Bruce Abernethy, Peter Dykes and Frank Boyle (Oxford).      Kevin has already won favour with "Dragons" supporters, many of whom regard his future as being extremely promising. 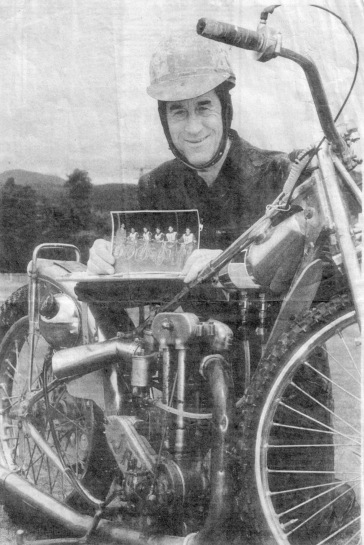 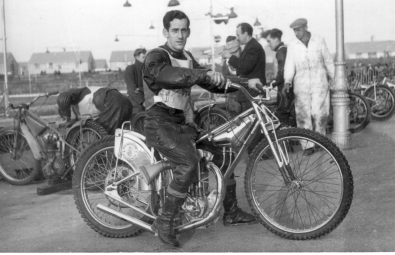 Photo at right is Kevin at Plymouth in UK (after Cardiff closed up) and shows in black jacket Mike Erskine who became a famous bike rider and builder.

Photo at left shows Kevin at a Taita reunion at Trentham with his 1954 JAP and holding a photo taken in Christchurch of the 1950 Hutt team of Charlie Spinks, Bruce Abernethy, Frank Boyle, Kevin and Peter Dykes. The track manager John Hunt shown at left. 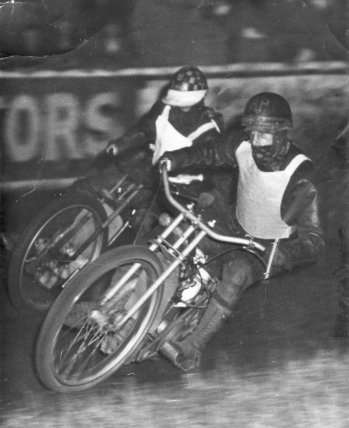 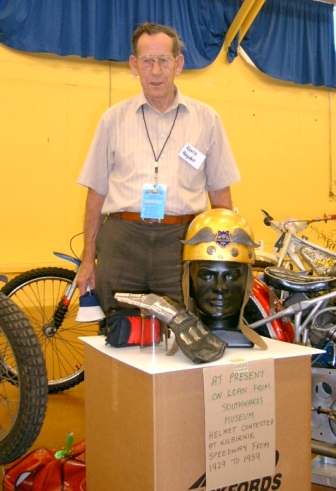 This photo shows Kevin at the Palmerston North 75th Jubilee in January 2006. He has the "Golden Helmet" raced for at Taita and other NZ tracks, which has many famous names on it such as Charlie Spinks and Bobbie Blake from Australia, Wally Kilmister and Kevin. There is a different Golden Helmet on the Christchurch Speedways page.

Also shown is the Silver Gauntlet which was competed for in teams racing and was last held by Canterbury in 1949-50 season. Although "owned" by Kevin they reside in the Southward motor museum.