By the late Harry Chambers with help from Gordon Mclsaac from our sister
Auckland Vintage Speedway club.

Webmaster--This was not true "speedway" but was 'Big Car- dirt track' with racing before midgets as we know them now. Some of the names mentioned such as AJ Roycroft and Gerry Mathieson later became involved with Western Springs when midgets started there.

It was the early years in 1928 when George Henning started building Auckland's first Speedway at Mangere, which he did incidentally at his own expense, and it was to be the trigger that drew a whole bunch of talented drivers, like a magnet, to take up the sport of motor racing. It was to be the debut of guns like; George Smith, A.J. Roycroft, Arthur Dexter and Dick Messenger, amongst others. The track was 1 and1/4 mile long but was to prove very dusty due to the volcanic nature of the earth there. George had planned to tar seal the track but that never happened.   The very first official event at Henning's Speedway, under the N.Z.M.R.D.A., which later was to become The Auckland Car Club, was run on January 21st 1933 as this notable Club was formed in 1932.     But it was a bit later in 1934 that Gerry Mathieson was about to make the early motoring fraternity sit up and take notice when he bought his 1924 Miller Special from Keith Cuttin, who had bought it from Bert Shorter of Shorter Motors in Shortland St. Auckland.      Gerry was an athlete competing in running, hurdling and cycling events, but now his life was to veer to a faster pace into which he seemed to fit quite naturally. He was an active type of man of slight build, always known as a natty dresser with sharp creases in his trouser legs.      The Miller (shown at right) had been built as an Indianapolis type car, but was never raced there, but in the hands of Count Zborowsky was used at Monza and Brooklands and the French G.P. etc. Now Gerry was about to make some of our locals think again about their brake horse power, after he'd cured some of the Miller's motor problems it had been dogged with, and competed with success with it until 1938.

The N.Z.M.R.D.A. meanwhile had obtained another track at Onehunga, calling it Gloucester Park and running the first meeting on January 5th 1935, and it was to be the genesis for Frank (Satan) Brewer at a meeting there on February 29th when he was immediately recognized as an up and coming driver of some ability, winning his first race in a beaten up 1930 Chevrolet.      That was the day Frank even won the novelty event, which included an egg and spoon race, bicycle race and one lap in the Chev. Rounding most corners on two wheels! Meanwhile through those early years race events were being held on beaches like Muriwai, hill climbs at Queenstown Rd. Onehunga, as well as the tracks and Gerry Mathieson was piling up trophies and winning championships. He was fastest up Queenstown Hill, beating the Seabrook Fowlds' Supercharged Austin "7" driven by George Smith, who later bought this car.      Gerry had enjoyed success in the Miller but when Western Springs Speedway opened in 1937 he decided that trying to beat some old mates and by doing full lock power slides on cinders would be fun, so started another career in the Alto Outboard red #17 Midget, but unfortunately one night had a bad prang coming into Pine Tree Bend that put him into hospital for three months. He sold the Miller in 1936 to Australian, Eric Morgan who crashed it, but in later years the Miller was fully restored and is believed to be in USA..

Another car that raced at Henning's was  built by Parry Thomas in UK for use at Brookland's and
other high speed European circuits. It was known as the Thomas Special or as the Hooker
Thomas as it had a Hooker engine. It remains in New Zealand but un-restored as at November 2006.

It is owned by Terry Roycroft.


At left is a page from the first Henning's program, the cover of which is on the right.

Below is the " Pukaki "  volcanic crater in which the Henning's track was built. 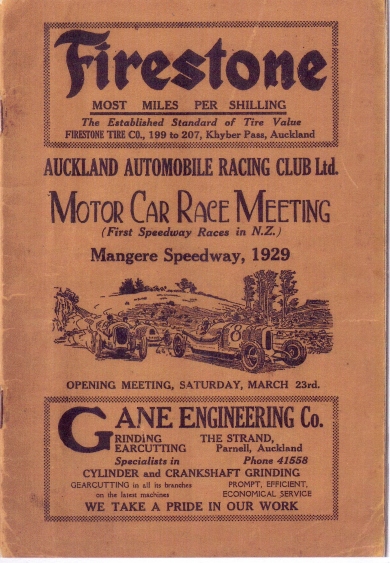 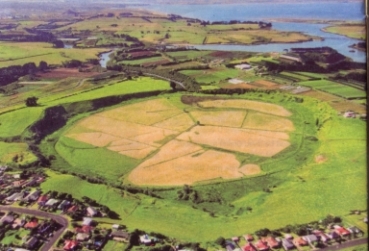 Below is a new found photo of Len Perry at Henning's Speedway. 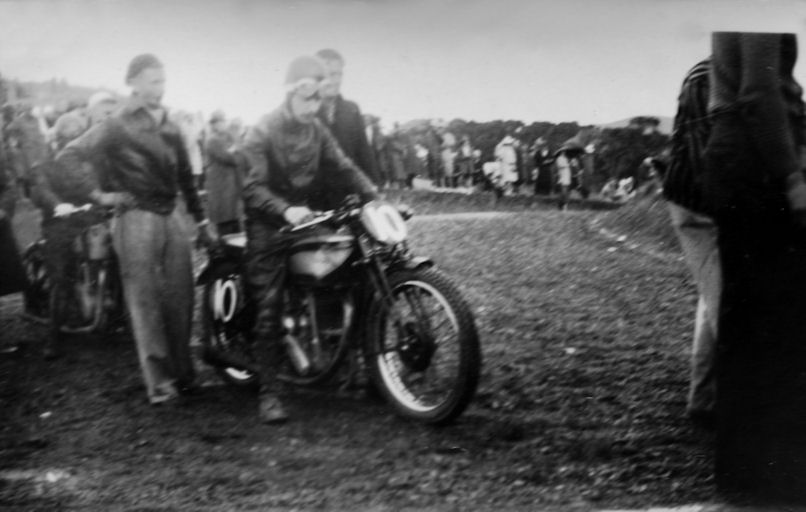