Text thanks to Alan Batt of Christchurch

In November 1929 a new track was opened up at Monica park in Woolston, in Christchurch and after the two tracks went head to head for one night, the more affluent Monica Park Promoters bought out the interests of Christchurch Speedways Limited and shut down the English Park track.
The continuous stream of top overseas riders gave the locals plenty of chances to gauge their skills against the best in the game, and soon a few of the local riders started to make a big impression on the sport. Percy Lunn, Norm Gray and Charlie Blacklock were the first home grown stars of the Speedway. These three were involved in many memorable clashes, particularly when the Chevrolet Gold Helmet was being contested.
While the depression of the thirties caused some interruption to proceedings with no racing in 1934 and several short seasons late in the decade, perhaps the biggest blow to Speedway was the death of Charlie Blacklock in a crash in 1935.  Blacklock had been the first of the locals to travel to Britain to seek fame and fortune.
In 1938 a group of Midget Cars with drivers from Australia, USA and Auckland added a new dimension to the previously "bikes only " Speedway. Among the early US Midget drivers were Duane Carter who went on to race in the famed Indianapolis 500 race. (he also had the distinction of winning the first ever midget race in NZ at Western Springs)
A noted driver who started his career at Monica Park was Frank Brewer who became known as "Satan" Brewer and was to be rated as world class. He was never to race again at this track though.
With the outbreak of World War 2 , the Monica park Speedway shut down for good. 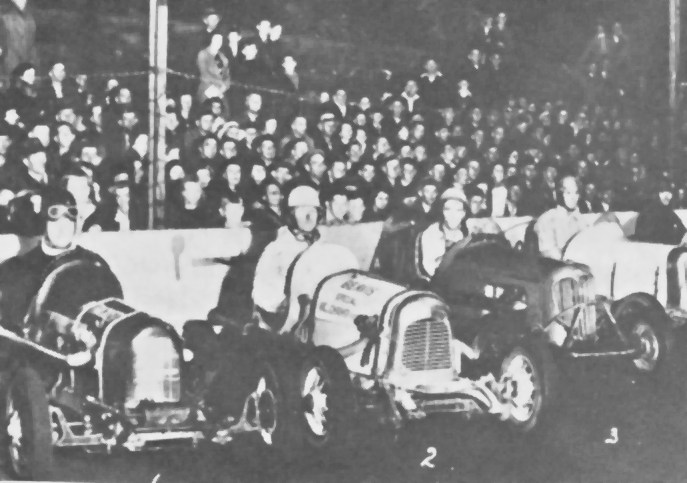 Photo (sorry about quality) is from an old Australian Magazine and shows International midget visitors to Monica Park in 1938. Left to right are Arch Tuckett, George Beavis, (Australia) Beale Simmons, Duanne Carter (From USA) and Gerry Mathieson (New Zealand) just out of sight.  Below is a program cover from 1935. The English team of Bill Clibbett and Stan Greatrex, plus the American Putt Mossman team of Putt, Ray Grant and Manual Trujillo were there for that meeting. 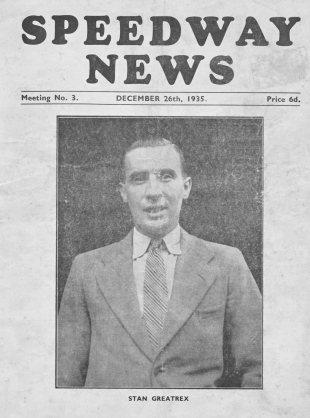