The Beginning of TQ Midget Racing in Napier.    In 1958 Ray Shirley arrived in Greenmeadows, and he bought a Three Quarter Midget (Car No. 8), from Kihikihi Speedway Club with him.     The arrival of Ray and his car raised a lot of interest in Napier and was instrumental in the forming of an enthusiasts group. The first meeting was held at Ray Shirley's parents house in Guppy Road. Those present at this meeting were, Ray Shirley, Lester Atherfold, Dick Gale, Jeff Laurent and Barry Stansfield. As more people became interested we moved our meeting place to Gordon Kelly's shed and it was from here we set out our plan to race on a quarter mile dirt track.     It was decided to approach the Napier City Council about acquiring a piece of land in Kennedy Road. After many meetings with the Council we were given consent to build a track in Kennedy Road, (the track is now long gone and the site is being developed for an overbridge for the motorway).     Numbers in the Midget Car Club began to grow and one of our members, Joe Graham (Smokey Joe), was able to acquire the use of a large grader and from there our first track was cut out. From here much had to be done. Local business people were approached such as Robert Holt Timber and Odlins Timber, and through their generosity we were able to get the materials needed to build the necessary fencing and complete the racetrack. Next on the agenda was finding people to help with all the necessary things needed for us to run a practice afternoon.     Our club started with about five "TQ's" and a couple of speedway bikes. After many weeks of practice and getting the track marshals and timekeepers etc, (timekeepers and officials in those days were, to name a few; Bert Donovan, Charlie Kinniter, Oke Sayers, Barry Stansfield, Dave Sylvester and Wyn Wyndham, along with many others), we then had to have the blessing of the Speedway Board before we could look at running an official meeting. The dub was lucky enough to enlist the help of Ralph Stockdale, a Car Club member who also became our Club Scrutineer. 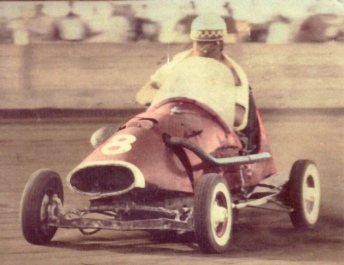 Because of the sheer hard work and enthusiasm of these men the racing began and the dust flowed at Kennedy Road Raceway in 1958 and then on 11 October 1960 the club was registered, and incorporated as Hawkes Bay TQ Midget Speedway Club. Forward by: Jeff Laurent and Barry Stansfield. 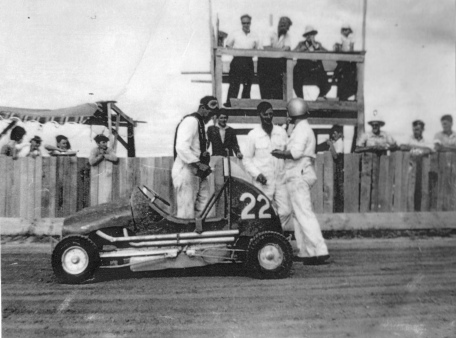 (Ray Shirley is shown on right)

The "judges stand" at left with George Wyndham and Barry Stansfield from left, look down on Ray Shirley in the helmet presents #22 driver Joe Henderson with his winners sash.

On right below Lester Atherfield is building car 10 while Ray Shirley sits in his #85.

Below is "Dusty" Rhodes on the outside passing Jeff Laurent in their TQ's. Dusty went on to win many championships in a newer car than shown (see below) 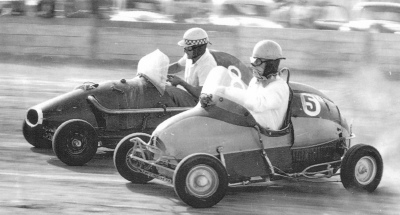 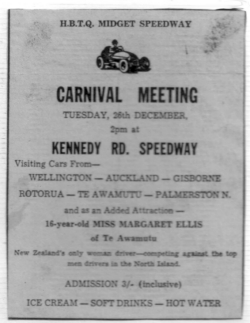 Boxing day 1961 saw visiting TQ's from several other tracks and included was Rod Ellis from Kihikihi,  while his 16 year old daughter Margaret also drove in her own identical TQ but had mechanical problems but made one second place with Rod having one win.       Both returned for another meeting on new years day and Margaret made 2 wins, 2 seconds and a 3rd while Rod had 2 wins.  Rod returned for a meeting on 22nd April 1962 and drove to first place in the A grade Hawkes Bay--East Coast championship. 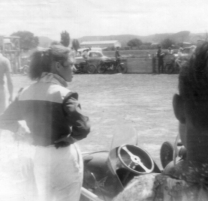 Margaret Ellis stands beside her TQ at the Kennedy Rd track.

Below left  is Dusty Rhodes mentioned above. This photo at the Kihikihi 50th reunion in Jan 2005. With the car shown he won 3 NZ champ's, 3 North Island champ's  and 3 East Coast champ's in the '60's. Bikes at Kennedy Rd. Brian Finch, Dave Plunkett, Trevor Adams and Colin McKee. 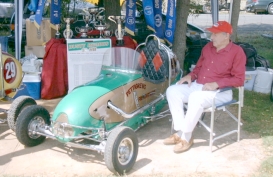 More history coming soon. Can you help with information?

"Saving the past--for the future"