There have been two speedways called Penlee. Each on farms near Masterton and owned by the Cartmell family. Currently it is Ivan who is shown in the first photo below.

A whiff of exotic fuel rejuvenates!
Speedway has long held a special place in the hearts of New Zealanders, and it’s an enduring fascination. Some of the men at last weekend’s Penlee reunion won’t see 70 again, but the enthusiasm is as strong today as it ever was. Wairarapa Times-Age motorsport man Kevin Ball reports.

See also "Speedway books for sale for a book about Penlee" 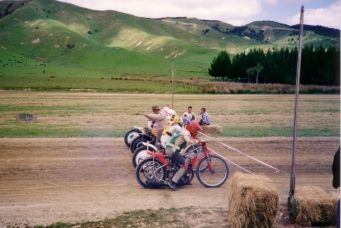 THEY’RE not quite as fit as they used to be. Many of them are grandfathers now. The hair is grey, the leathers have somehow shrunk over the years. The reactions mightn’t be as quick as they were, nor the vision so keen. But give them a whiff of the exotic smell of Methanol and Castrol R racing fuel, let them hear the crackle of a high-revving Jawa speedway engine, and 50 years fall away just for a while.
That’s how it was at an oval lime track on a Hughes Line farm at the weekend, when around 40 former speedway riders turned out for the 30th anniversary of the Penlee speedway.  In the 1970s the Penlee track, in the shadows of the Tararuas near Mt Holdsworth, was a significant venue, attracting the top riders from far and wide, with big crowds turning out to watch the action. Before that, of course, there were the glory days of New Zealand speedway, when trainloads of fans stopped at Solway and the showgrounds were a Mecca, along with Kilbirnie and  Taita  and other circuits around the lower North Island.
Penlee took over from Solway Showgrounds. Penlee has long gone, but Ivan Cartmell keeps the tradition going, with the development of the Hughes Line track, on his farm.  Ray Wood, from Carterton, turned up with the original BSA he raced throughout the lower North Island. That bike passed through several hands and eventually Ray found it again, gathering dust in a barn. He has lovingly restored it to better than original condition, and showed that at the age of 60 he can still put in a competitive lap or six. Ray caused some chuckles, going out on to the track with a white scarf billowing behind him, a la the late great Bruce Abernethy, who died last year. Ray was tutored by Abernethy, and raced one of the flamboyant rider’s bikes..
Several of the men at the weekend’s reunion had raced in England and/or represented New Zealand at speedway, following in the footsteps of “greats” like Ivan Mauger (he phoned Ivan Cartmell from Australia to say he couldn’t be at the gathering), Ronnie Moore and Barry Briggs. Kevin Hayden and Kevin Bock, from Wellington, Robin Adlington, from Palmerston North, our own David Bargh, Lance Gandy, Peter Gay ... all have raced at the highest level, and they were there at the weekend.

On left is opening day at Penlee in November 1971 which welcomed 2500 spectators. The Penlee riders quickly became known as the "Penlee Pirates" as the track was not licensed to the ACU. The track started as a 'practice' track for all the riders that were racing over at Napier at the time but it soon became a racing track.

The first champion of the track was Noel Suckling who later rode for Berwick in the British League. Included in the many fine riders who learnt their craft at Penlee were three sets of brothers. They were the Cartmell's, Ivan, Winston and David, the Miller's, Rick, Steve and Gavin and the Bargh's, John Jnr., Lawrence and David.

The first Penlee was a 325 yard track designed on the English lines and meant for speedway bikes only.
The farm was sold and the track lost to the family.

THE HISTORY OF THE TRACK (number two) From a local newspaper in 1999
In January 1995 the Cartmell brothers, Ivan and Winston decided to hold a reunion of the Penlee Speedway riders who rode on the track on the family farm in Norfolk road during the 1970's. The only problem they had was where to hold it. The Wellington team had a track down at the Montgomerie farm at Pirinoa but it was too far away from most facilities, so they had a brain-wave, “lets build our own track - after all we've done it before" so that’s just what they did.
They had done it all back in the early 70's on their parents farm under the shadow of Mt Holdsworth so it wouldn't be as hard this time would it ?
They put a huge amount of effort and cash into it and formed a 220-yard track on Ivan's farm at Hughes Line. Hundreds of tons of lime have been spread and leveled, tyres have been set out around the edge of the track, (even in the wee small hours) and we now have the Wairarapa-Wellington Wolves based just 10 minutes from Masterton on a track as good as you could find (privately owned) in the country.
If support continues to grow, who knows ? we could have lights and a return to the night racing that some of you may remember at the Solway Showgrounds.
Watch this space ! ! ! ! ! 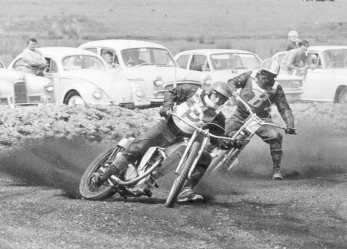 This photo on right shows Ivan Cartmell on a JAP leading Terry Beresford on a BSA engined bike during a meeting before the fence was erected. 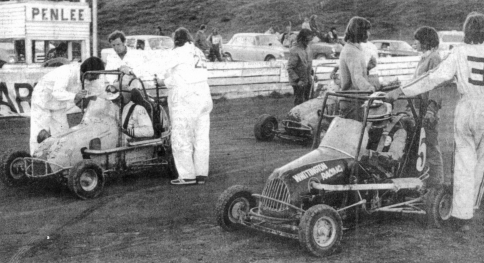 TQ's were tried at Penlee with cars from Meanee and Palmerston North attending. #25 is Stu McKay, #5 is John Graham and car behind is Paul or Terry Jefferies. Taken in 1977 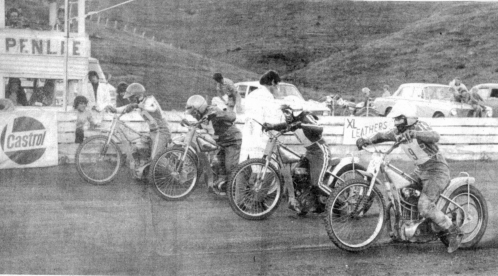