The Roycroft family of speedway drivers.  A.J.,  Ron and Terry.

This three generation of Roycroft's all drove on speedway but AJ and son Ron also drove a lot of tarmac cars and motor cycles. Last in line Terry drove a few seasons of speedway but not with the success and fame of his elders.

Research for this article is taken from the book “Up to Speed”--(The Roycroft years in New Zealand motor racing) written by Scott Thomson. Terry Roycroft and Scott have both given permission for the use of info and photo’s from the book, and for that I am very grateful. I strongly suggest this book be added to any motor sport enthusiast’s collection.

It all started in the 1920’s in Auckland, with the first of this Roycroft trio, Albert James (AJ) Roycroft, getting the taste for motoring and speed. In his mid twenties, he built his own special motorcycle. It was a Harley frame with a big Harley twin motor, minus one barrel, so it was a 350cc motor. He raced this on grass, but soon a full Harley Twin allowed him to race with Percy Coleman and others. AJ worked in the motor industry, selling cars, and then acquired the General Motors agency at Helensville.
At this time son Ron was eight and already getting a taste himself for motors, when AJ purchased a 1920 Type 22 Bugatti. Not a genuine Bugatti ‘racer’, but a converted road car.  Beach racing had started at Muriwai, which had almost 30 miles of flat sand, and AJ, who had progressed from push cycles through a competitive period of motorcycle racing, was ready to try the four wheeled racing. The track was usually about six miles long with a hairpin bend at each end. The competitors cars included Sunbeam’s, modified Model ‘T’s”, Alvis, Essex and Chevrolet and a Stutz (which we will see later has a link to New Plymouth)
His first meeting netted AJ a second place, although he led his first race as well, and he and young Ron were pleased. A racing type 13 Bugatti followed and among racing venues visited was George Henning’s track built in the swampy grounds of an old volcano near Mangere, in 1929. Henning had wanted to build a concrete banked track, but settled for a clay track which was lapped at over 70mph. average, and was very dusty. (Editor, I suggest that this track was the first 'speedway' in NZ although much longer than the 1/4 mile tracks that followed) 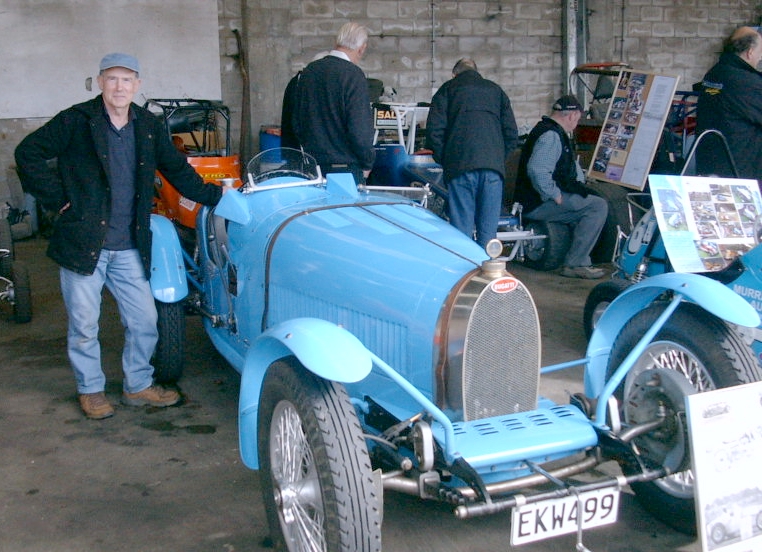 However, the depression was setting in around 1929 and caused motor racing world wide to slow down, with only a few beach races and hill climbs in New Zealand.    As the depression lifted Ron continued to race and AJ still competed in the re-purchased type 22  Bugatti, or a small Austin 7 “Ulster” which was a racing version of the then popular car. The track at Henning’s closed in 1935 and AJ and others were looking around for another track when the Mayor of Onehunga obliged with a site at Gloucester Park.

At right is Terry Roycroft with his Bugatti originally owned by his father Ron.

I now quote from Scott Thomson’s book, although I have abbreviated the extract and added small detail that pertains to speedway.

Father Christmas arrived in 1937 with a big sack of little cars for the boys. He smelt a bit sooty but the whiff wasn't from the big man's squeeze down the chimney. It came from freshly raked out cinders and hot engines, and the hotdog stand that tempted several thousand Christmas pudding stuffed Aucklanders to a night at Western Springs speedway.
The gas lit quarter-mile circuit had been a magnet to the city's [solo] bike riders since 1929 and the great-grandfathers of today's petrol-heads and boy racers filled the terrace seats and breathed in the dust. Heroes were the motorcyclists, the fastest and most daring men on wheels, who broadsided their way around, and when they saw the funny little cars they laughed and laughed.
Midget racing cars had been in the wings for a while. Two years earlier George Smith had built one called Tom Thumb with a Harley Davidson motor. Smith and Merv Hardy - who used a Henderson four engine - did a few demonstration laps round Gloucester Park at a 1935 meeting and three midgets were on show at a motorcycle meeting at Western Springs. 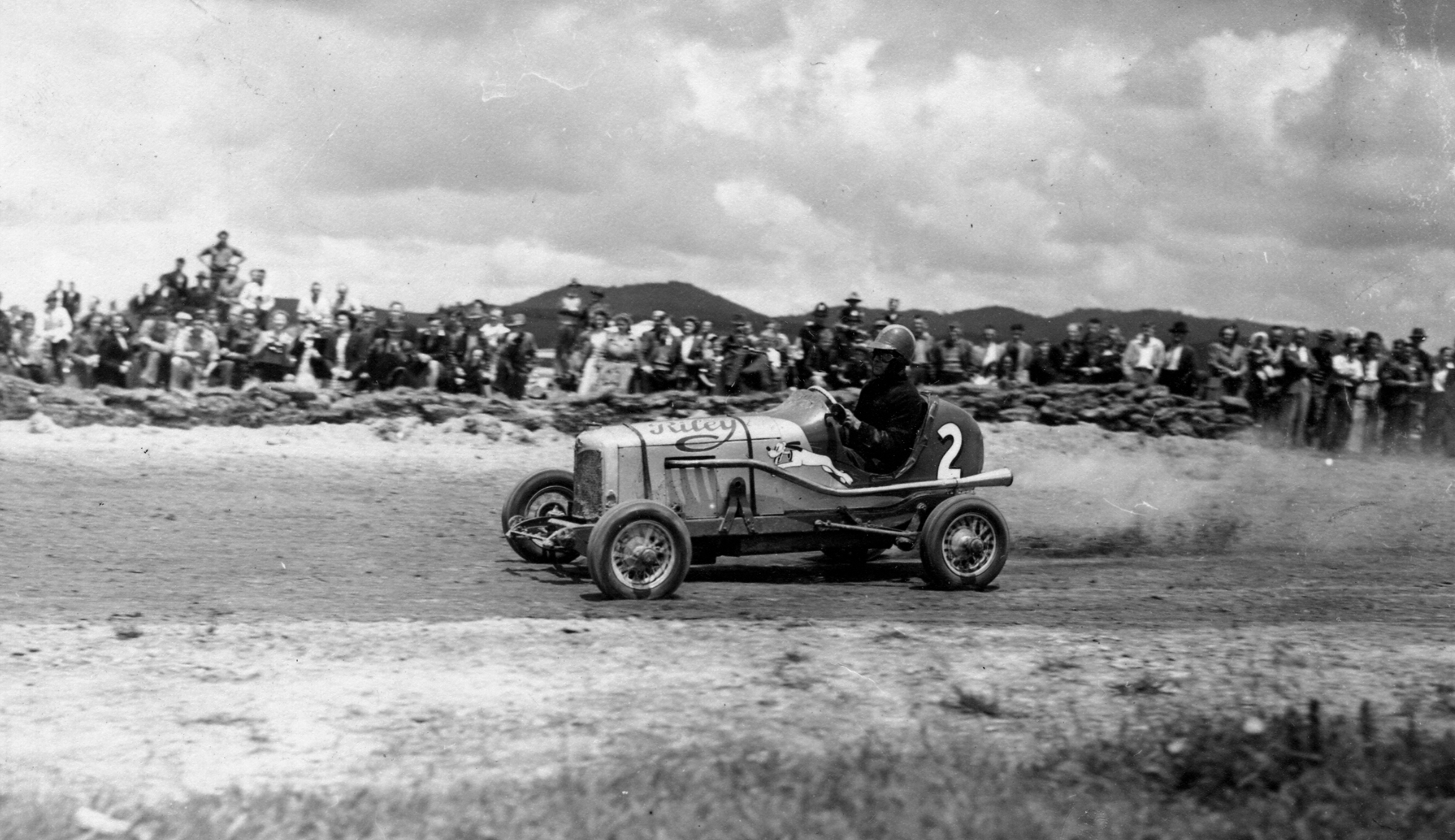 AJ Roycroft's overseas trip convinced him that the American style midget offered the best way forward for the sport and could be a commercial proposition. AJ talked with Smith, Jerry Mathieson, Harry Butcher and Arthur Dexter, who all agreed to give it a go.
Ron’s friend Harry was often round and the pair pored over photos and drawings of midget race cars in the widely circulated American magazine, Popular Mechanics. The first Roycroft midget grew slowly, presumably paced by Ron's resources and the progress of AJ's company on the promotional side. Bits from the RJR of Helensville days went into it, and an Austin 7 engine. The wheels were as sold for wheelbarrows, all very experimental. They built a neat single seat body with an air pressure fuel pump on the left-hand side. RJR got himself a crash helmet, posed for the family photo session, and they were ready to go.

This photo shows Ron at Huntly
Speedway in 1945