Article by Peter Hosking of Christchurch.

When the Templeton track opened in 1963, it attracted a group of young riders who were keen to try speedway. One of the newcomers was Frank Shuter. Others were: Tom Black, Allan Brown, Murray Burt, and Roger Wright.  Frank was the first of this group to head overseas to England. He went on to ride in the British League for nine years and to have a brief stint in the American league.
Frank  was born on the 17 June 1943 in Rotorua and came to Christchurch with his parents in 1952. His father, Frank senior, was one of the South Island's leading motor racing drivers in the 1950s and is remembered for his Edelbrock Special and Maseratis. After school Frank worked in his father's garage and on race days he would go along to meetings and help in the pits.
Frank's first job was at Mace Engineering where he served his apprenticeship. He began competing in motor sport around this time riding in scrambles and grass events on a BSA Gold Star. He also drove his father's Special in meetings at Waimate, and Ruapuna and at the Tahunanui Beach races. His first taste of speedway was on the 23rd February 1963  when he had a couple of rides on Tony Nesbitt's bike.  After sharing Tony's bike for a few meetings Frank bought a bike from Barry Briggs and he  began to move up through the grades. In December he was selected to ride for Canterbury in a match with a visiting team from Hawkes Bay. 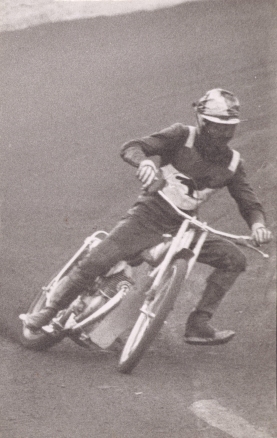 In the late 1970s Frank set up his own engineering machining business in Los Angeles.  The business took off in the 1980s when he obtained contracts to make prototype components for MacDonald Douglas and he also did some work for the NASA space programme. Around this time he took up flying and bought his own small plane.
There was one final episode in Frank's speedway career.  On 8 October 1988 he returned to Swindon for a reunion of the 1967 side.  In a match against the "Soft Water Centre All-Stars" he scored 2 points.
In the early 1990s he moved his business to Hemet a small town in the Californian desert.  He did some machining work for American drag racing legend Larry Miner, and this led to him being invited to join Miner’s support crew.  Frank and his third wife Barbara moved base to Indianapolis at the end of 1993 and they followed the drag racing circuit for a year driving a celebrity bus for Miner, entertaining VIPs at drag racing meetings.
In 1995 they decided to return to Hemet and Frank reopened his machine shop.  In 1996 Steve Millan visited the business and found that it was "meticulously looked after and the gear was all top quality.”  Millen, was interested in buying the machine shop so he invited Frank to a speedway meeting at Costa Mesa where they reached an agreement on the sale, and that Frank would stay on to run the shop for the STILLEN Company.
Sadly Frank died in an accident a year later on 12 July 1997 when he was riding home on his motor bike after visiting his brother and was hit at an intersection by a driver who did not see him.  Frank was 54 years old and was survived by his wife Barbara and his four children. (Photo at right is Frank riding for Swindon in 1968)