On December the 12th 1949 speedway opened at Tahuna Park in Dunedin. It was still running in 1952 but actual closing date not known.

A report in NZ Speedway Review of June 1950 mentions that it was  a "return" of speedway in Dunedin. It stated that the Tahuna opening was a "welcome return for speedway in Dunedin after 20 years!"
It mentioned a track called "Speedway Royale now known as Tonga Park" which had opened just before the world wide depression so closed soon after.
Some riders mentioned that rode at Royale were Jim Nesbit, Burton, Frogley, Kempster, Spinks, Matson and Wally Kilmister. (sorry about lack of  first names)

Riders at early Tahuna meetings were locals Trevor Allen, Jim O'Kane, Ashton Quinn, Evan Nesbit, Ian Shand, Bruce and Colin Marsden, Wattie Morris and Ron Ashton. There were others later but the most prominent was Ron Johnston who was couched by Rom Mason of Belle Vue in England who visited Tahuna for three weeks.. 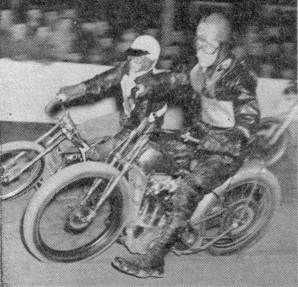 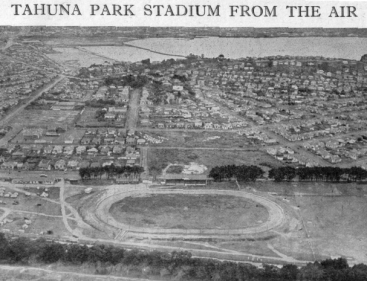 Photo at left shows Dunedin city in background left. It was a cinder track next to a camping ground and the pits were in old cavalry stables.

(We know the track was open in December 1952 but can anyone help with history after that?)


Photo at right shows Ron Johnston on the outside of an unknown rider at Tahuna.

Can any reader supply information on the Speedway Royale track and its racing or further info on Tahuna? 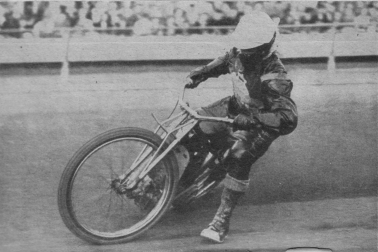 This is Ron Johnston who rode at Tahuna then went to UK in 1950 and rode for Belle Vue and Sheffield.

Photo at right in 1950 shows 4 finalists in Otago Championship. From left Aston Quinn, runner up, Trevor Allen, Ron Johnston, winner and Jim O'Kane. Bikes and leathers were kept very clean during season as a prize of a new JAP motor was given for best turn out during year. 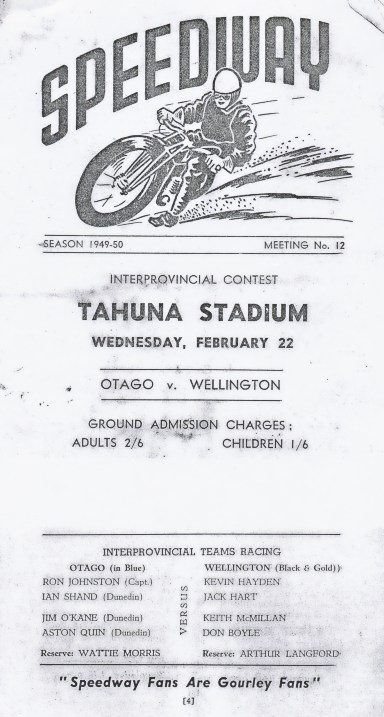 Hi Max, thank you for the some treasured memories created by your great website.
From my documents and recalls,  I wish to share some info on Dunedin in the 50s when  "Wednesday night was Speedway night" and everyone who had the time, and loved the spectacle, went to  "Tahuna Park." Some other riders that also were also consistent entries included, ALLY BAKER   ( Who was a very popular plugger.) BOB DUCKWORTH  ( Who took the  "Non " safety fence out just above the pits lane and had the crowd on their feet with concern)  TOM WHEALAN TOMMY JOHNSTON  ( Ron's Brother )ALLAN FIBBES, BERNIE RILEY
And later towards the closure which was from my memory between 1955 and 1957 the new breed of riders were on the scene including RON WYLIE, NOEL McTAINSH, OWEN FREW, and a few others who are lost in the haze.
However the closing of Tahuna was good news for a few of the Otago Motorcycle Club 1/4 Mile grasstrackers, who took advantage of the 500cc JAP Speedway bikes that were for sale, and some dropped the motors in to TT and other gear boxed frames.
With Regards
Cecil Leopold 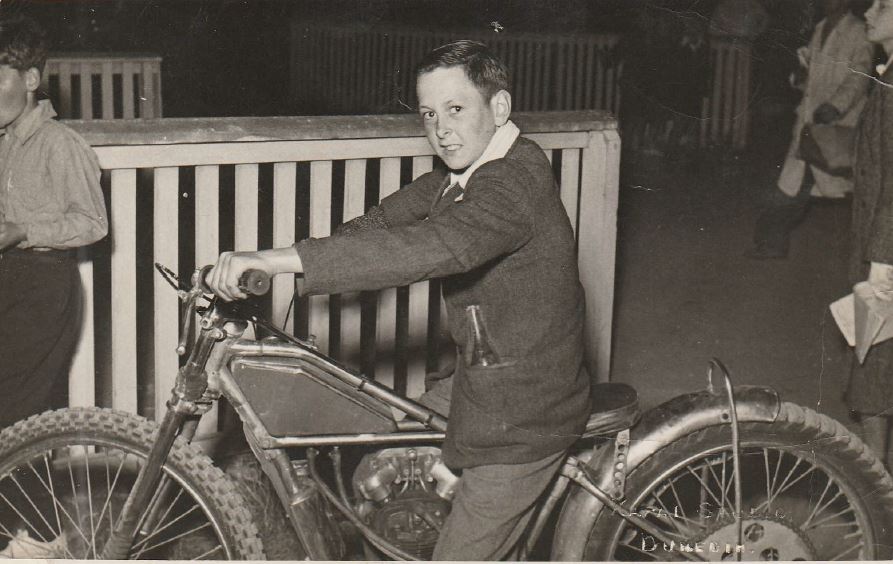 (Cecil shown astride Tom Johnstons 500cc JAP in an Excelsior Frame. These frames were quickly replaced with the superior "Staride"  frames which were all the go overseas at the time. NOTE the bottle in his coat pocket )

Regarding the bottle in the photo,  there is a story attached to that.   During the "Tahuna Speedway" years, the on site food and drinks stall was run by a well known Dunedin identity called Don Dennis who's biggest seller was the famous "Gourleys Pies" as advertised on the front page of the programme. There was a poem going about at the time and some of the words included,  "At Speedway you get mud in your eye and mud in your pie--etc etc ."

Anyhow, back to the bottle in the pocket, Don Dennis used to give a refund of three pence for each bottle returned, so we could always collect and sell enough bottles each meeting to earn enough for the one and sixpence entry fee for the coming week. (That's what kids did in those days )

Around about 1956 or 7, my brother and I purchased three ex "Tahuna Speedway" bikes to use on the various OMCC grass track events.  They were a bit slow on the straights without a gearbox, but it was so good to always come out in the lead after the sweeping corners.  As the Speedway frames had very little ground clearance, we and many others fitted the high performing JAP motors in to a variety of frames to suit the courses.  I also bought a "Staride " frame less motor which was brought back from England by Ron Johnston and sold to Ashton Quinn, with his name still on the back guard.