A 1981 publication called "No. 1 in Speedway" said Te Marua opened in 1968.         The Wellington Stock Car Society was formed in 1964 and its members raced at other North Island tracks until Te Marua was  opened.  Te Marua track was started by "Stock Car Promotions Ltd"  From 1968 to 1972 only Stock Cars were run but after that Saloons and Solo bikes were added with Sprint Cars later in the 70's.

This article appeared in a 1973 program and describes the start of Te Marua       The 1972-73 season at Te Marua Raceway hailed the start of the third era of speedway in Wellington, and tonight will be the highlight of the season when we stage the Fourth International Speedway Test between Great Britain and New Zealand.      The three previous tests have resulted in 2 wins to Great Britain and one win to New Zealand so tonight we will see an all out effort by members, of the Kiwi team to square the series. With Ivan Mauger, Ronnie Moore and Barry Briggs as heat leaders and with the local track knowledge of Gandy and Smith, the Kiwi side is very strong and should win tonight to square the series.       Speedway had its start in Wellington at Kilbirnie in the early 1930's with famous names like Wally Kilminster (later to ride for Wembly), Les Mangham, Harry Mangham, Alf Matson, Len Southward, Bernie Appleyard, Roy McKenzie and Clarry Tonks. Crowds were large in these days and there was always plenty of action. Australians like Lional Van Pragg, Blue Wilkinson, Dick Case and Vic Huxley were well known visitors to the track.      After the war Alex Pratt opened a speedway track at Taita in 1947. This was at a time when speedway was flourishing overseas and this gave local riders a chance to ride overseas and for overseas riders to appear in New Zealand.  Bruce Abernethy, Kevin Bock, Frank Boyle, Jack Hart and Kevin Haden rode in the British league for a number of years with British riders Bill Kitchen and Split Waterman were contracted to the track. Teams racing started in 1948 with a challenge from the crack Aucklanders, John Hunt, Jack Scarlet, George Mudgeway, Len Perry and Harold Fairhurst against the local team of Abernethy, Bock, Boyle and Alf Clarkin. Other league racing followed with teams from Hawke's Bay, Palmerston, Christchurch and Dunedin.        Patrons of Te Marua will be well acquainted with Ritchie Tunbridge in No.16 and may not know that before being won over to stockcar driving he was a champion speedway rider.        Les Moore, in Wellington for the wall of death act, brought his 15-year-old son along to compete at one meeting at Taita. Young Ronnie Moore not only performed incredibly well that day, but went on the became twice world champion. Overseas riders who appeared at the track were Malcolm and Gil Craven, Jack and Norman Parker, Peter Pawson, Eric and Fred Williams and Bill Osborne from England, Ken Le Breton, Aub Lawson and Bill Truget from Australia. This season, apart from Gandy and Smith, other local riders showing their pace on the track are Ivan and Dave Cartmell, (See Penlee page), Bill Sargent, Kevin Sorney and road racing champion Mal Wrigley. Both Sorney and Wrigley are in their first season of track racing. 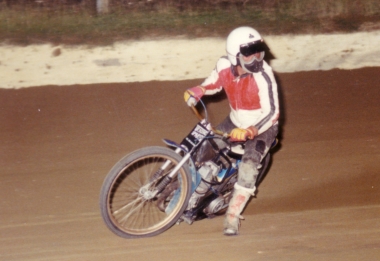 The photo below shows Gordon Nicol leading Ivan Cartmell, also at Te Marua. Gordon (also known as Crazy on speedway) rode solo's at Te Marua, Penlee and Napier, then after recovering from a major accident took up saloons then sprint cars. Ivan was one of the owners of the Penlee track.

We will add to this page as information becomes available.

Back to New Zealand Speedways. 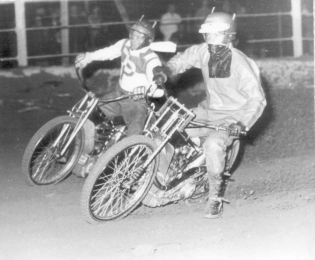 Photo below is from "Timeline" on their facebook page. 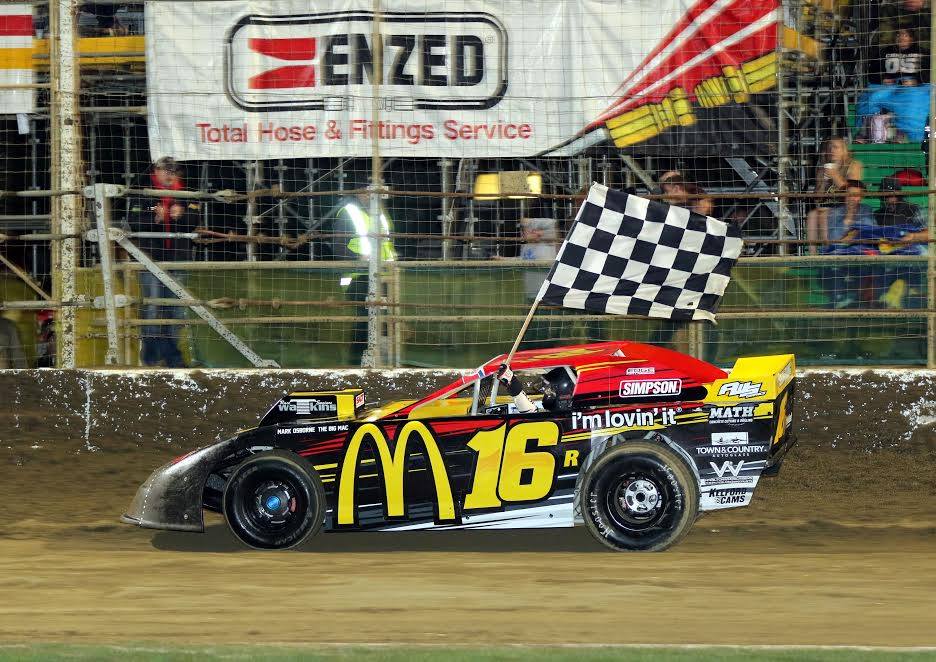