After Aranui closed in 1959 a site was sought for another speedway and eventually construction began on a Speedway stadium at the Templeton Domain, now known as Ruapuna Park.  It's at Hasketts Road in Christchurch. Stock car scrambles were held as a way of earning funds to build the new track. The club managed to survive many organisational problems and on 29 April 1962, the track opened with a daytime meeting. Problems with the tracks foundation meant that the track did not reopen until the16th of February 1963, but one plus side was the track's lighting system had been set up and night Speedway was back on the scene. The late 1960's and 70's were great days for Speedway in Christchurch with many of the worlds great competitors racing at Templeton at some stage or another. Visits by the English Solo Test Team and American Midget Cars always attracted big crowds with the traffic jammed for several miles as eager Speedway fans made their way to the track. Among those to race at the speedway have been legendary figures such as US midget driver icons A.J Foyt, Mel Kenyon and Bob TattersaIl. Australians Ron Wanless, Jim Airy and Ronald MacKay. On solo bikes the track has been raced on by Denmark's Ole Olsen. Sweden's Anders Michanek and Ove Fundin and scores of competitors from far away shores like Japan, Holland, Hungary, Slovenia and Italy. And of course New Zealand's "big three" , Ivan Mauger, Barry Briggs and Ronnie Moore. Apart from a three season flirt in the mid 1980’s with private promoters, the Templeton track now known as Ruapuna Speedway, remained as club operated. While these days the sport has to contend with more competition for the entertainment dollar, there is hope on the horizon that Speedway racing will return to its former glory. Since the start of the 2005/6 season, the speedway is promoted by Springs Promotion’s, who also hold the reins of the world famous Western Springs track in Auckland.  With new promoters the track has a new identity being renamed Powerbuilt Speedway, due to a sponsorship arrangement with Powerbuilt Tools. The Christchurch Speedway Association continues to operate, as a landlord of the track, and as an organisation to support competitors and supporters. 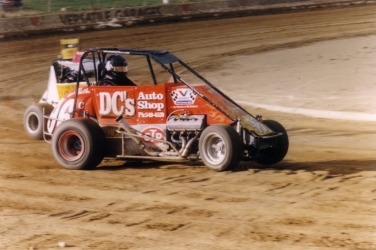 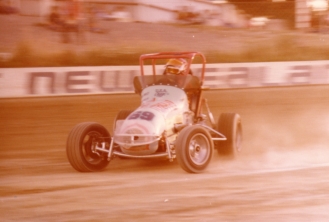 Photo's supplied by Dave Cawley of Christchurch show him in the ex. John Godfrey  midget with Offy engine in 1978/79.     At right is Dave in a Beast copy with Toyota V8 in 1996.     Below is Dave leading Rex Burt in TQ's in 1971/72. Rex and Dave were known as the Papanui Twins, as they were sponsored by Papanui Car Sales. All photo's taken at Ruapuna. 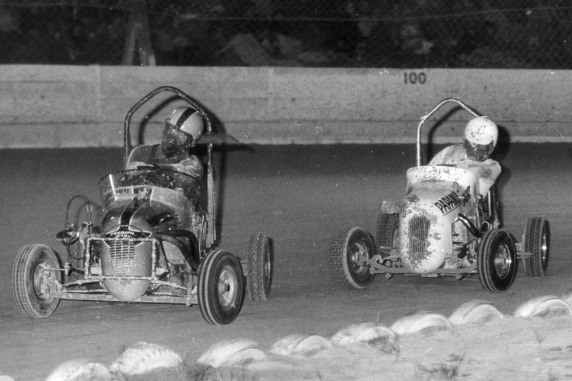