(Newspaper clipping from 1948) "Bruce Abernethy Praised By English Speedway Writer
If I've been asked once in recent weeks as to how Wellington speedway star Bruce Abernethy has been getting on in England, ! I've been asked a hundred times. Well, he's getting on rather well in a land where the competition is the toughest in the world. In fact, he's been getting some most favorable publicity. For instance, the following extracts from "Speedway Express," an authoritative English speedway publication, is worth reading., Here goes:-
Some weeks we throw the bricks, some weeks we hand out bouquets. After watching a certain race at Wimbledon last Thursday the bouquet came to hand immediately. No, it wasn't the doings of the American Wilbur Lamoreaux, or the antics of "Split" Waterman, which rang the bell, but  the courage and pertinacity of a youngster, at present unknown to many of you.
Not many people took time out to take a peek at a fresh-faced, slimly built youngster in his early twenties, sitting anxiously in leathers, waiting for the Anniversary Cup match to end, waiting for his ride.
The name of the lad, ---Bruce Abernethy.
Bruce, keeping an anxious eye on the weather (memories of the previous week when, after an hour's wait in the very wet pits, all he got for his pains was a shower!)  fidgets--and waits.
"Split" Waterman, too, was waiting. After spending the afternoon pushing the youngster around the car-park he waited to see the results of his labours. And, to cap it all, Bruce had been loaned "Split's" second best "grid" for the evening. SICKENING THUD
The Anniversary Cup finally comes to a halt. Bruce picks himself up from his seat, is pushed around by a zealous  photographer, finally manages to dis­entangle himself from the "shutter clicker's" clutches, is told by "Split" to "have a go" and out of the gate goes Bruce, quicker than a bat out of Hades.
Into the first bend in best Waterman style he hurtles. More by luck than anything else the law of gravity re fuses to take effect. Into the pits' bend roars Bruce. Again the gods are with him, and up the straight he races. Into the bend again and wallop: Bruce and the bike go in different directions. Bruce hits the ground with a sickening thud. "Split's" "second-best" follows was suit. "Split" looks for a convenient river.
Shaken but undaunted. Bruce picks himself up, finds himself all in one piece, rights the bike, jumps into the saddle and roars into the pits' bend again. We watch   Bruce, ignoring the other three riders. He comes into the bend too fast, and once again gets a I close-up of the Plough Lane cinders, while the bike nips of to pick flowers or summat !
Again he picks himself up, and throws a cheeky grin to the pits where "Splits" is quietly having hysterics. Back he comes into the pits, the smile on his face still stretching from ear to ear. "Nice bike. 'Split,' - he says. "But how the blazes do you ride it?”
So let's hand our bunch of nosegay,  or whatever we have, to "Bouncing" Bruce Abernethy, from the Land of the  Kiwis. A lad with a heart as big as his broad grin and with the pertinacity, courage and determination of a real  Lion.  If the latter counts at all in this cinder game, then Bruce is a ,.inch to make the grade. Watch him now, he's raw, but he's will­ing. And what's more. he's got the nerve to do no. For it takes nerve, courage, determination, call it what you will to pick yourself up twice in one race and still have a go as though nothing had happened. Especially when it's only an unimportant scratch race. But maybe it was more than that to Bruce?
Bruce Abernethy has had many rides since then and he's improving all the time. -To earn such a "bouquet" in his  second English ride is good going, but he'll do even better now that he is getting used to English conditions- Wallie Ingram, Hutt newspaper.  19/07/1948 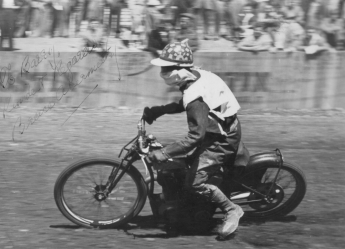 Here is an interesting letter written by Ian Hoskins in 2000 to "Vintage Speedway Magazine" in UK.  "Following the obituary to the late Bruce Abernethy which appeared in a recent issue, (in 1999) chance has since sent me a vintage press cutting from New Zealand telling of the death of another Kiwi speedway great, Wally Kilmister, and how he discovered Abernethy.      The daughter of Wally Kilmister's late sister was browsing through her mother's papers and came across a press cutting telling of his death the previous day in a Roturua hospital after a long illness at the age of 65. Unfortunately the clipping is not dated and goes back more than 20 years to the mid-seventies.   Nevertheless, what it reveals is a character insight into both Wally and Abernethy of which many of us may have been totally unaware.       Kilmister, described as the doyen of speedway racing in New Zealand, was the first New Zealander to make a real name for himself in Britain when he rode for Wembley Lions in 1930. Born in Karori, Wellington, he made his track debut at the age of 17 as an apprentice mechanic in the New Zealand grass track championships.      When the Kilbirnie speedway opened in the late twenties, Wally (known locally as Kelly) rode on opening night and showed above average ability which took him to England. After he retired from speedway and returned home following the war he became a regular visitor to Taita speedway track where he first saw a raw novice named Bruce Abernethy.  In the clipping Bruce is reported as saying: `I was anxious to get on with the thrill of racing when a man approached me and said: "You ride very well." I told him I was too busy to talk; l had to race. Later the man approached me again and announced himself. I nearly fell over, because Wally Kilmister was my idol.     Then he asked me if I would like to ride in England. He took me to a house and telephoned England. It was the first time I had heard anyone ring England. He made contact with the Wembley club and that was how I got my start there.     "Kelly was a terrific man. He was in England for about 20 years and had his own engineering business. His house was in London and it was open house to any New Zealander. In fact it was like New Zealand House then. Anyone from here who went to Kelly with a problem was never turned away.    If anyone was stuck or experiencing hard times, Kelly was the man to see. He must have helped hundreds of people out of difficulties.      The writer then went on to report that Kilmister was the first New Zealander to become a World Champion, regrettably a mistake as he never reached a World Final - though he did qualify for the 1935 Star Final at Wembley.        If the image of Bruce Abernethy is rather anchored in that of a great practical joker, his tribute to Kilmister shows another side of his character, a man who saw greatness both on and off the track, in his mentor.      I too remember Wally Kilmister. He once helped me to master my mini-motor cycle when I was the Wembley mascot. He had a great sense of humor and for years owned a sports shop at the corner of the road that passed Wembley's main entrance. This became a mecca for many fans.By Ian Hoskins. 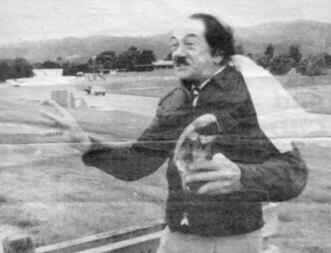 Photo shows Bruce in 1991 on the site of the old Taita Speedway. He's wearing his old leather jacket and holding his old steel boot and of course he has his trade mark white scarf on. BUT !! It is not a scarf! Keith McMillan's (Another Taita rider), son Glen told the editor that as Bruce did not have a scarf that day they draped some toilet paper around his neck for the photo session!

"Saving the past--for the future"