Near the harbour entrance of the port of Greymouth.

This track caters for TQ's, Stocks, Saloons, Modified's and other classes.

Speedway started in Greymouth in early 1956 when three or four TQ's were invited to a demonstration on a trotting track at a local fair. Following the interest from that demo a track was started at Wingham Park which was the rugby league ground. Coal slack from the nearby coal mines was used as a surface and proved very good. Racing started boxing day 1957 with only six cars but for the start of the 1957/58 season there were twelve. The fields were sometimes boosted with cars from Christchurch.  Other venues tried were the Reeftton Racecourse and the Kawatiri Airport. The TQ club folded in 1962 but another club was formed later. This was The West Coast Stock Car Club which started in 1971 on a site on the Kumara Straight.
This site was developed over the years until a track closer to Greymouth was sought. 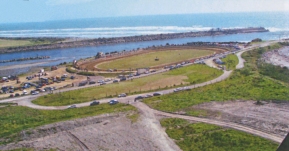 The first meeting at the new Greenstone Park track was in December 1985. It is along side the mouth of the Greymouth River. (Shown at left) Improvements over the years allowed the track to be certified by Speedway NZ with the first national championship meeting being held in the 1992/93 season.

This track remains in use as at 2009 and recently celebrated its 25th birthday..