The Kilbirnie Speedway was VERY close to the neighboring houses! Most speedway historians accept that Johnnie Hoskins started speedway meetings at West Maitland in NSW Australia in 1923. Although there had been grass track racing in NZ, actual speedway racing started at Kilbirnie on March 9th 1929. Winner of the first ever speedway race in NZ was HD Ross of Napier. During that first season other names that became well known were Wally Kilmister, Tui Morgan, Bill Allena and Jack Arnott. As the season wound to an end, a Lady rider, Fay Taylour from Ireland appeared in the two Easter meetings. After Dave Managh won the NZ championship on the Saturday night, a match race was staged on the Monday between Managh and Taylour. Taylour won in a seasons fastest time of 1min  35 1/5th seconds.  Visitors from Australia and England again helped get the racing going  in the 1929/30 season but Wally Kilmister was generally acclaimed the "king" of that season.. 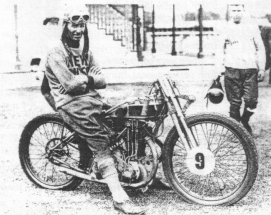 First NZ champion* in 1929 was Dave Managh.  Although a Kiwi he had ridden in Australia before Kilbirnie opened.
(* see note at bottom of page)

The third and perhaps greatest season saw new stars emerge with notable rides from Alec Pratt (later manager/promoter of  Taita and Aranui speedways), Tim Wilkinson, Clarrie Tonks and Eddie Naylour. The season also saw visits from England and Australia of teams of four and several great meetings were seen. With NZ suffering from the 'great depression' the next 1931/32 season started late and never really reached the peaks of the previous seasons.  Star riders included Kilmister and Alf Mattson who had both ridden in England during the off season. Kilmister returned with a new JAP engined bike and this gave him an edge over the collection of Rudge, BSA, Norton and other types of converted road bikes used to that date by the locals. Visitors from USA, Australia and England again visited but did not in all cases show up the locals. Racing started again in February 1935 and this opening meeting included Lionel Van Praag from Australia. Also featured in this meeting was "The introduction of Midget Car Racing to New Zealand". That was how it was billed but the cars were hardly true midgets in the style of the then current US midgets. One was a Morris Sports car and the other a special built by Len Southward which had a Harley Davidson engine and front wheel drive. 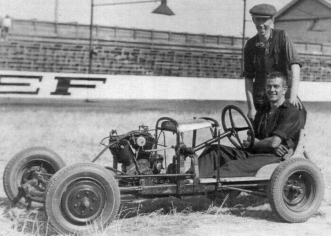 Len Southward's midget before body was added. Charlie Tonks was the driver. Photo from Southward Trust. Len was also a notable engine tuner and kept the great Wally Kilmister's bike in top order.

The 1935/36 season started in December '35 with a lot of overseas riders contracted including a team of nine from USA known as "Mossman's Motor Cycle Rodeo and Circus". A crowd of 10,000 arrived to watch this 'mixed meeting.'  The locals and US visitors were reasonably evenly matched and good racing prevailed but the main events were won by Englishmen Bill Clibbett and Stan Greatrex. The following week the circus had moved on and racing resumed with Wally Kilmister back from a great season in UK and he was again the dominant rider of the season. He had many close races with Van Praag who was to become the 1936 World Champion.

Showman Mossman returned from USA for the 1936/37 season and became the promoter of the track. Although speedway was starting to suffer from declining fields, he contracted enough riders  including Jack Hobson from Christchurch and Dick Lawton, Tim Wilkinson and Ted young. Overseas riders during this season included Vic Duggan and Bill Melhuish. Unfortunately only two meetings were run and motorcycle speedway in the Wellington area did not surface again for eleven long years when Taita track in the Hutt Valley started. 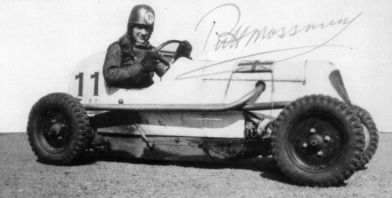 This is the American Putt Mossman's midget used at Kilbirnie.

Kilbirnie did see a short season of Midget Car racing in 1939 but then closed for good.

An early rider at Kilbirnie was Len Southward of the Southward Museum fame. "I enjoyed reliability trials almost as much as the cinder track at Kilbirnie, and many an enjoyable evening was spent at the latter. The local lads all tried to build bikes to suit the track and my first machine named the "Home Brew" was basically an Indian Scout frame with a springy copy of the Harley peashooter forks, the motive power being supplied by a 1000 cc JAP KTOR motor with one cylinder removed, which made it 500 cc. I was the first hospital case when a spill put me in the way of Peter McGhee's knee, and to this day I carry the scars on my lip, but this in no way dampened my enthusiasm for the sport."

Fay Taylour is shown in the photo at right. Read about her above. 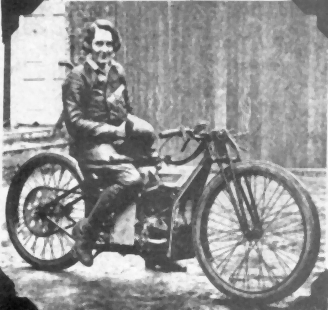 Below is Clarrie Tonks at Kilbirnie on his Rudge. Photo courtesy of the family of the late Mrs. Elsie Gray who at 19 years of age was a spectator at Kilbirnie.

The webmaster is immensely grateful to Allan Batt of Christchurch, for allowing extracts from his book "The Speedway Kings of Kilbirnie" for this page.

THE OTHER 'FIRST' NEW ZEALAND SPEEDWAY CHAMPION  From Alan Batt's great book "The Cindershifters"        Auckland rider Alf Mattson is credited within the official journals of being the first New Zealand Champion, following his win at Kilbirnie on Wednesday March 26 1930.
The meeting was advertised as The First New Zealand Speedway Championship ' and Mattson's victory was achieved against eleven other riders representing Auckland, Wellington Christchurch and Dunedin. The format was four heats, of four laps, with three riders in each from a rolling start . The four heat winners, plus the two fastest runners up progressed to the two Semi Finals , with the winner of each going into the Final , along with the fastest runner up.  For the record the result was Alf Mattson, 1st : Harry Mangham 2nd Eddie Naylor , 3rd     But there had already been a New Zealand Championship held at Kilbirnie the previous season on March 30, 1929.  This was at the fourth meeting and the feature attraction was an appearance by Miss Fay Taylour, the great English Speedway rider.  Miss Taylour was not eligible for the New Zealand title, which had attracted nine entrants.
Once again the field was split, for three four lap rolling start races.  The first of which had Peter McGhee ( Harley Davidson) , Ron McKenzie ( AJS ) and Jack Arnott, who was also on a Harley . McKenzie was slow to get away and Arnott fell, so McGhee progressed through to the Final with an easy win.
The second heat starters were Tui Morgan ( Harley Davidson) Eddie Naylor ( Douglas ) and Bill Allen ( Norton ).  It was Allen's turn to make a bad start, and he was some way behind at the drop of the flag.  He soon got by Naylor however, and was closing in quickly on  Morgan when he got into a big skid at the southern bend and fell. Allen remounted, but he was too slow as he watched Morgan and Naylor disappearing into the distance.
The crowds favourite , Wally Kilmister on a Douglas started as the red hot favourite for the third heat . His rivals were Dave Managh on a New Hudson and Napier rider H.D Ross on a J.A.P.  At the drop of the flag they went side by side into the first bend however there was great disappointment when Kilmister pulled up with mechanical problems.  Managh and Ross had a keen tussle, with the former winning by a narrow margin.
That left McGhee, Morgan and Managh to fight it out for the New Zealand Championship.
From the rolling start Morgan got a great start, however he fell on the second corner leaving Managh to inherit the lead. Despite his best efforts, McGhee couldn't quite catch up leaving Dave Managh as New Zealand's ' other' first Speedway Champion.
Some comment on Kilbirnie Speedway written in the year 1991 by Jocelyn Fisher, a descendent of Wally Kilmister.
The man who was the star of Wellington’s first motor-cycle speedway, at the Kilbirnie Stadium about 40 years ago, and then went on to win international honours in his sport, died recently in Rotorua. He was former Karori boy, Wally Kilmister.
Mr. Kilmister had not lived in Karori for many years but in his day he was one of the best known former pupils of Karori School. He died in Rotorua, at the age of 65, after a long illness. He had been in the light engineering business in Taupo for several years.
Wally Kilmister rode his first motor-cycle races at the age of 17, while he was an apprentice mechanic, in the mid-1920’s. In those days the races were held on grass, usually racecourses, and the riding technique was quite different from that needed for the loose cinder surfaces of the prepared speedways, which came into vogue in the late 1920’s.
When Wellington’s first speedway was opened at Kilbirnie Wally Kilmister quickly became its star performer and one of the best known personalities in the capital. He went to Britain, where he won fame in the Wembley Lions team, and he scored a string of successes before returning to New Zealand. He raced briefly at the Taita Speedway after World War 2, went back to England for some time, and then returned to New Zealand, finally settling in Taupo.

Return to NZ speedways.     "Saving the past--for the future"