By  Dusty Rhodes.
When I moved to Hawkes Bay in October 1960 I found that a TQ group had raced on a track since 1959 at the Taradale end of Kennedy Road somewhere in the vicinity of where Downing Avenue is now.  The first speedway person I met was Ray Shirley who lived in Morrinsville and raced at Kihikihi in the late 5Os. He invited me out to the track one Sunday where I met the gang.  Jeff Laurent, Frank Harwood, Joe Henderson, Ron Butler, Lester Mathieson, Bob Watson, Johnny Welford, Bill Harbored, Reg McKinnie, Brian Bates, Lou Ireland, Ed Rowe, Carl Bartlett, John Fairley and others whose names escape my memory.
The track was mainly shingle and contained many stones that hurt like hell if you didn't see them coming.  The fence was a real doozy; it consisted of three horizontal rails right round the perimeter with 4 and 6 x 1 inch vertical boards attached. Sun warp, age and shrinkage soon made a recipe for danger but with no money and a plentiful supply of boards it was either race like that or not at all.
After some races, the outside of the track was littered with boards and pieces of boards that had been plucked off by intrepid passing maneuvers on the outside. However all survived without too much damage except maybe Francis Gibb who desperately wanted a drive in a TQ so Joe Henderson bravely put her in his car for a jaunt. Some jaunt. After a couple of laps she poked it through the fence with only the back half in sight. She carries the scar on her chin to this day.       Early in 1961 the City Council were muttering about needing the ground under the speedway for further residential development so the hunt was on for a new area. Someone in the TQ group realized that the domain at Meeanee was Council owned so the pressure went on to allow us to develop there. After much two-ing and fro-ing discussion they gave the green light. Well it was all on then. Anyone who knew anybody remotely involved with earthmoving etc., was harassed and hounded into submission. During the early and mid part of 1961 there were working bees on top of working bees and everyone interested in speedway was either going to the track, at the track or going home from the track, on weekends, after work or on days off. I don't really know and I don't really want to know where a lot of the material came from, and who was browbeaten for it; but I do know that some of the ships that left the port were a bit short on wire ropes and fittings. There were earthmovers, tractors with buckets, spades, picks and shovels and trucks of all sizes and a host of manpower to handle every situation. I was driving a truck at the time and with a mate from work, along with Mckinnies, Charlie Hill, Brian Bates, Rae Bros, Bill Prebenson and others we carted limestone from Websters Lime Works behind Te Mata Peak to the track. All were overloaded to hell with my mate and I carrying nearly 20 tons per load which was about double what we were supposed to carry on single axle artics.
During all this activity it was decided that a proper club be formed so the HB TQ Speedway Club came into being and some sort of order followed. It should be mentioned here that speedway bikes were always part of the activities although they did not figure in the Club name. A few years later with the advent of stockcars and their offshoots the name was changed to the HB Speedway Club to cater for all the classes.
Grandstands were a bit sparse with only minimal seating around the banks so a good stand was built on the start of the finishing straight. In later years the back straight stand was built. These and improvements to the pits and officials buildings were ongoing projects in the years that followed.
Lighting became an issue around 1964 and with the help and expertise of Mike Cowan and large band of assistants, helpers and slaves, this became a reality. I recall that further ships left the port slightly depleted in the wire rope and gear department.  A few years later the club tore down the ailing wooden safety fence and went the whole hog on a continuous concrete fence. The cost was horrendous and the agonizing great as there were very few around the country to compare with but it was the way to go.
At last the officials and helpers could relax somewhat and get down to what it was they were elected to do.

The photo below was sent in by Bob Andrews who was at Meeanee recently for a bike meeting put on by the Veteran Riders Ass.   Bikes are shown on the inner short bike circuit. 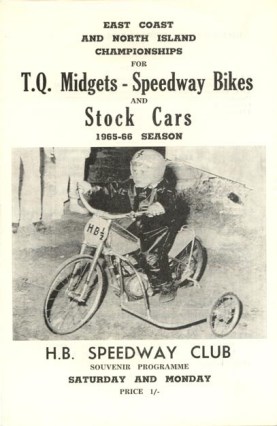 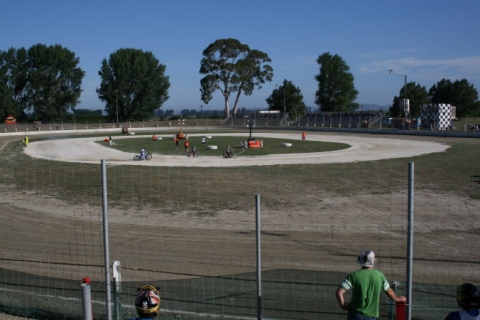