Merv started in Speedway in 1946 and progressed reasonably well at Western Springs in Auckland and in 1949 he was in the Auckland League team. Picked for New  Zealand vs Australia he scored 12 points  In the 1951/2 season Merv captained his local team to the League title and took the Auckland track Championship.
In 1952/3 he was a member of the N Z side against England and scored 28 in 3 matches and was ranked 3 in N Z by Stenners. Englishman Fred Pawson from Norwich was in N Z as a free-lance and contacted the Stars management about Merv and so he was invited to join the Club for the 1953 U K season    On his first night at Norwich he crashed but had shown enough to get a place in the team the next week. He scored 4 points beating among others Graham Warren. His main drawback was "tarmac starting areas" as he had never had these before. He soon settled down and by the end of the season was a regular in the side scoring 130 in his 39 matches. On the last night of the season Merv won the Ely Supporters Trophy.    Back home he took second place behind Harry Fairhurst in the N Z Championship.  The 1954 season in the U K saw Merv miss the first month but on arrival his progress was noticeable. A regular spot in the team saw him record a total of 225 from his 37 matches. Merv was a member of the National Trophy Finalists team and was capped twice for Australasia against England. As he left for home the possibilities for 1955 were obvious - he would become one of the top riders in the team. 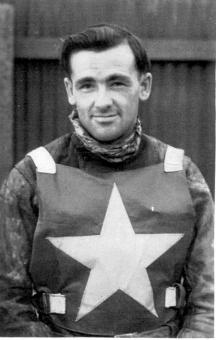 However when the new season dawned there was no Merv. He became involved in Stock Cars in NZ and then his arms were burned in an accident. We never saw Merv ride for Norwich again.  In N Z he was again capped for N Z in 1956 against England.     For the January 1958 NZ Grand Prix Merv purchased the ex Bruce McLaren centre seat T39 Cooper sports car with Coventry Climax engine. During the following 3 months he won a race at Levin and had 2 fourth placing's at Teratonga and a lot of DNF’S.     Later in 1958 Merv returned to the U K but as a  racing car driver with a Formula II Cooper car. I saw him on numerous occasions at Snetterton Racetrack. On 12 July and 2 August Merv rode at the Firs but decided not to resume in the Sport. At the end of the year he returned to N Z and carried on racing there.    In 1959/60 he rode 3 times for N Z v Australia scoring 45 points.  In 1962 Merv finished second to Ronnie Moore in the N Z Championship at the Palmerston North track. 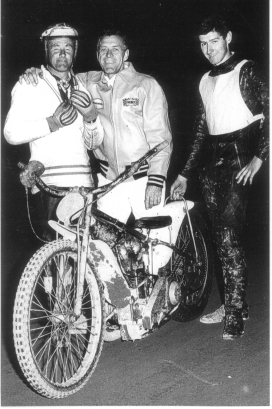 I have a note that he also appeared in N Z colours against England scoring 20 in 5 matches during the 1967/8 season but no mention of him since.
Photo left shows Merv in the Norwich Stars colours in 1954. Photo right is Merv on left with Famous US midget driver Bob Tattersall and Max Amor.