In its own way speedway is a sport that started being something of a gimmick that grew to the stage of being a sport.
There have been times that Promoters have swelled the coffers by interrupting a nights racing with some sort of sideshow. Elephant races , rocket bikes and appearances by Movie stars were once all the rage .
Nowadays Demolition Derbies, Fireworks and Monster Trucks do the same trick but all fade into insignificance when stacked up against the greatest side show to hit the speedways.
In fact calling it a sideshow is perhaps serving an injustice as members of Putt Mossman's Motor Cycle Circus and Rodeo were also damn good speedway riders.  The world was doing it tough in the thirties.  Markets had crashed, and some currencies were close on worthless . People enjoyed the simple things in life and made the most of the sporting and entertainment events in their home town. While many Speedways were attracting big crowds they were struggling to keep their leads above water.
They needed that something extra and Mossman's troupe provided that.  It is fair to say that Putt Mossman saved more Speedway tracks around the world than any other person.  The American Stuntman appeared at many tracks in Australia , New Zealand, Britain and the USA. Of course the reputation as being one of Hollywood's top stuntmen helped the publicity somewhat.   Mossman was a superb showman and breath-taking stunts were a specialty. His repertoire was full of tricks - all of a motorised variety.

In New Zealand Putt Mossman made his first Christchurch appearance on Boxing Day 1935 at the Monica Park Speedway when in the company of fellow Americans Ray Grant and Manuel Trujillo he competed against crack English riders Bill Clibbett and Stan Greatrex, and Christchurch rider Jack Hobson.
The crowd roared its approval at a great display of Broadsliding , but the show stopper was the display of trick riding put on by Mossman, his wife Helen and Dessie Grant .
The Christchurch Press simply described the show by saying "nothing quite like it has been seen here before."  On January 11 Mossman's Troupe split in two with Byrd McKinney, Bob Diehl and Bo Lisman competing on the cinders at Monica Park while the rest of them put on a Stunt and Trick riding show at Auckland's Western Springs. While the boys in Christchurch met with mixed fortunes it would be a night that Mossman would never forget.
With a crowd of around 15000 in attendance Mossman roared up a steep ramp on his motor cycle. The one foot wide ramp was built over the spectator terracing but the tricky bit was that Mossman did this stunt blind folded.
The return trip down the ramp had the added attraction of Helen Mossman lying full length on the ground for her blind folded husband to hurtle over . Earlier in the night it had rained lightly and part of the ramp was still damp.  On striking this part of the ramp Mossman's machine went sideways, he lost control, the end part of the ramp collapsed and the out of control machine struck Helen inflicting serious injuries. She was hospitalised for some time.
The show had to go on and perhaps with the added publicity generated by the unfortunate Auckland incident a huge crowd packed Monica Park the following week for a performance by the Mossman troupe. In fact so big was the attendance that over 500 more people were admitted to the stadium infield to witness the show.
Unfortunately this move meant that many of those seated in the lower rows didn't get to see the whole performance. Some were lucky enough to get double value, as Mossman repeated his performance on each side of the stadium to make up for the inconvenience caused.
Besides showing himself to be a motor cyclist of exceptional skill Mossman was also a top class marksman and one of his acts had Mossman standing on a moving "rider-less " motor cycle shooting down balloons with a pea rifle.
Mossman's 1935-36 NZ tour finished at Monica Park when his troupe competed in a USA versus New Zealand Speedway Test match and a rendition of Mossman's famous Rocket Bike Stunt for which a ramp was built from the top of the Monica Park stand.    After the USA team of Mossman , Trujillo, Pee Wee Cullum , Sam Arena , McKinney, Lisman and Ewald Schnitzer had defeated the Kiwis ( Wally Kilmister, Jack Hobson , Squeak Rhodes and Jack Forbes ) by 14-10 the ramp was hastily erected and three walls of flame were put up on the infield for the Rocket Ride.
Putt successfully negotiated his way down the ramp and through the first two walls of flame however he hit the third one on an awkward angle and fell suffering minor arm injuries.   In 1937 Mossmam returned to New Zealand and he not only toured with his troupe but he also promoted Speedway events at Wellington's Kilbirnie track and the Palmerston North Speedway. 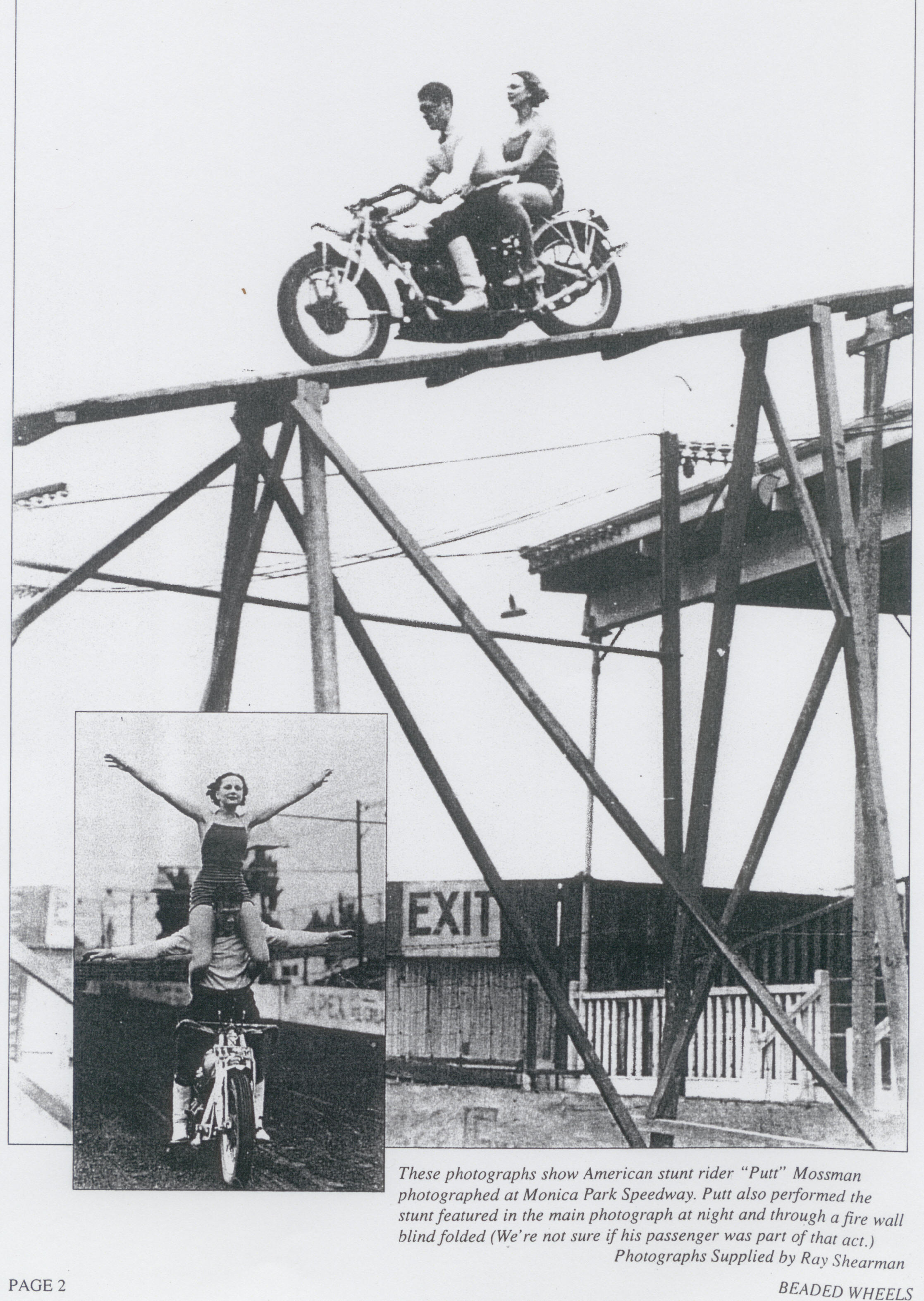 The future of both tracks had looked grim until he took over . Being the supreme showman he had many strings to his bow. His 1937 visit also saw him compete in the New Zealand T.T Race around Waiheke Island. His third place in the grueling 168 mile race showed a talent for Motor Cycle Road Racing.
Well known Wellington mechanic Dick Lawton told of Horseshoe throwing competitions between Mossman and his staff . These were usually held on pay day and it is fair to say that Mossman won much of the payroll back. Another talent was underlined by a stint as a professional baseball player with the Boston Braves.
The late forties saw his Stunt show all but finished. Television had taken a large slice of his audience . Then one of the stars of his troupe his sister Dessie Grant died .   In 1973 his name had almost faded into oblivion however somehow he received an invitation to appear on the Johnnie Carson TV Show in the states.
Carson allocated ten minutes to interview Mossman on live TV. An hour later the interview finished. Carson, the other guests waiting in the wings and an estimated forty million strong TV audience sat captivated by his stories. This did much to preserve his name to another generation.
It is amazing that he lived so long , having died in the last few years. Putt Mossman was something of an oddity. A great showman and a great sportsman.
Perhaps more importantly he was one of those who was a saviour of speedway in New Zealand in the thirties.

A time when such a person was needed most.  The photo
at right was taken at Monica Park Speedway in Christchurch.