Thanks to Robert Andrews for information and graphics.  Photo shows the track and pits in September 2007 on a practice day. In the background is the Go Kart track.. 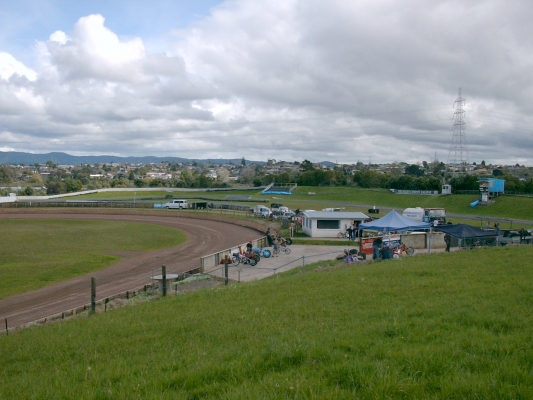 Below--Bob Andrews on right with his old arch rival Bryce Subritzky at Rosebank, in 1993. 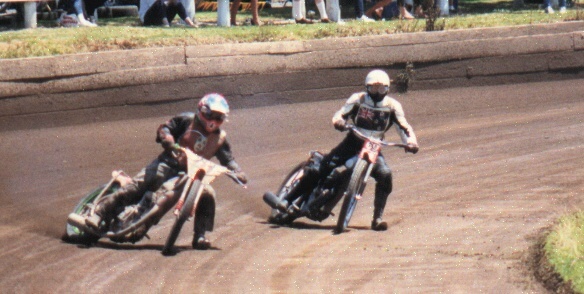 “I remember that Alan Clark originally pegged out the track and it was quite big.

“The night before the guy on the earth moving machine was going to cut it out, along came Bryce Subritzky and Rim Malskaitis and of course they had been drinking (a lot) and they pulled the pegs out. From around the corners.

“Now Rim was just about 6 foot tall and Bryce was about 5 foot tall, so they start on the inside of the bends and call their paces, One -Two right up to maybe 30 odd paces and pegged that distance. That would then be the track width on the corner. Now Rim's paces were about 6 inches longer then

Bryce's, so that's why (earlier) bend 1 and 2 were much wider than bends 3and 4.   And the track was smaller than it was going to be.
“The other tale I told English Promoters was that I was taking Colin Tucker over with me to race in England and that he built Rosebank Rd Speedway so they signed him up and put him to work on Crewe Speedway which he built more or less on his own.  Kiwi “have a go at anything” attitude.