Stockcar racing in Auckland (commonly known by most racers as the "Big Smoke") started in the 1950's at Western Springs. After a while the Stockcar racers moved to Epsom, racing there for a while successfully. Stockcar racing then moved to Gloucester Park, and then in the mid to late 1960's, moved to it's present location at Waikaraka Park, where they have raced ever since.      The United States and Allied Forces used Waikaraka Park originally during World War II, and they erected a two-tier concrete grandstand, which is very sturdy and is still used to this day. The track is a 460m long dirt oval, with a modern concrete wall and a catch fence around the outsides of the race surface for protection. Wire ropes and strong netting are used for this reinforced catch fence.      Over the years there have been many titanic battles during racing, some fans and racers alike would remember names such as Sam Ferabend 16A, Graham Mitchell 10A (who went on to win a NZ Championship),  Ray "Wrecker" Wright, Laurie Hines 28A, Kevin Free 61A (who went on to win 3 NZ Championships), and Frank Irvine, not forgetting the infamous Pall Mall Stockcar Team.        Some may recall Frank Irvine winning the 1980 NZ Champs at Waikaraka Park, and Kevin Free winning the NZ Champs at Waikaraka Park, in 1993 (the third time he won it).        Waikaraka Park is very accessible, being situated in Neilson Street, Onehunga, on the edges of Manukau Harbour within easy reach of all facilities.        Classes presently raced at Waikaraka Park are A-Grade Stockcars (or SuperStocks), Standard Stockcars, Super Saloons, Limited Saloons, Modifieds, Youth Ministocks, Sidecars and Streetstocks.    Major titles are raced at Waikaraka Park each season, along with local (regional) titles. More info on track history would be appreciated. Can you help???

Photo below is 53a Phillip Marx , 17v Rick Campbell ,  73a Bryce Marx and on right 97a Robin Thomas battling with 48m Phil Towgood at Waikaraka Park. 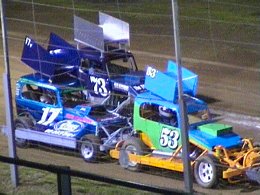