The roots of Ocean View Speedway were formed back in 1971 when Roy Eaton and Paul Carrick hatched the idea to develop a stockcar track at Landguard Bluff, adjacent to Wanganui Airport and overlooking the Wanganui River and Tasman Sea – hence the name Ocean View Speedway. It was waste land before they started. Eaton had raced successfully in Palmerston North since 1963, being a member of the Palmerston North Panthers in his Valiant powered stockcar with the cut-down Jowett Javelin body. Carrick had also previously raced stockcars but had long given away competitive driving. The work on developing the track was completed by a local contractor with the help of the Wanganui Stockcar Club and other keen competitors. Estimates of the cost to build the track seem to have settled in the region of $20,000.00. People like Warwick Sisson were co-opted to grade the track and Charlie Berntsen helped build the toilet block. The biggest problem in the early development was the weather – being too hot for the grass to take properly resulting in bare, dusty terraced surrounds and a dusty track. But with the all work completed Ocean View Speedway was ready to run under the banner of Ocean View Speedway Ltd promotion under the control of Eaton and Carrick.

After an initial rush of crowd numbers the support slowly dwindled as the golden weather continued that summer with the sweltering temperatures driving people to the beach instead.  Keeping the track moist in such conditions produced headaches of their own but the promoters persisted.  Wanganui soon developed a reputation as the place to visit with some of the best drivers from the Central League area turning up to support the promoters.  That early season was dominated by the high profile Palmerston North Panthers line-up of Bruce Robertson, Charlie Berntsen and Peter Hetterley in the points stakes with support from Jack Noaro and Warwick Sisson.  But Wanganui held its own with the likes of the experienced Dave Hooper prominent supported by veterans Ian Davidson, Allan Pryce and Mick Murray.  One new name that emerged through the season was Jim Rison.  But some of the great names of the era made their way to this new track with the likes of Alan Jago, John Adamson, Albert Gordge, Barry Sommerville, Barry McKenzie, Bernie Hamley, Arthur Roper, Wilbur Chiles, Gil Mallia and John Hanright names that jump out of the pages of early pogrammes.

It still runs today. Below right is a photo of Peter Drake at Wanganui in 1974.

Directly below is a photo of modern times. 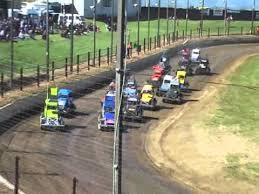