Actually called Pitstop Whangateau raceway it was close to Warkworth but closer to Leigh, it wasn't a Speedway NZ track and not CTRA either. It ran for only two seasons.

The photo shows the late Trevor Hunter and his son Shane driving at Warworth around 1990.          Shane is in front with a Ford Telstar engined car and Trevor is in the last car he raced which had a Toyota motor. He was experimenting with wings which were not allowed on midgets on SNZ tracks.

I would like to know more about this track if anyone can help? 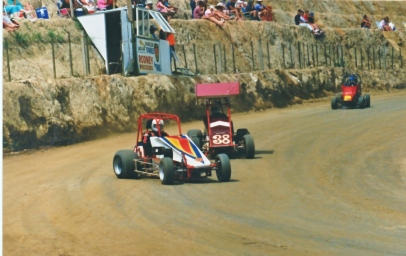