New Zealand tracks outside Taranaki,  You can visit the web sites of the speedways which are current from our  links page

Bay park  Speedway   Baypark is located at the junction of State Highway's 2 and 29, Mount Maunganui. 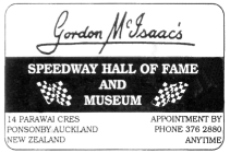 Gloucester Park  (closed)    This track in Onehunga, Auckland, was used for a short time in 1935.

Hastings Twyford Stadium,   (closed)  Omahu Road, Hastings.  (Was running 1949 to 1952 but little known about it as yet) Can anyone help?

Meremere Dirt Track     This track runs vehicles not used on other tracks in NZ Near Hamilton.

Oreti Park            Sandy Point in Invercargill, New Zealand, (The most Southern Track in the World?)

Rosebank     An Auckland track for solo bikes, TQ's and Sidecars.

Rotorua Stockcar Club.      A track 20 minutes out of Rotorua in central North Island.

Taipa Speedway    Near Kaitaia in the far north of the North Island. Run stock and saloon cars.

Te Rapa Speedway    (closed)   Was located on the outskirts of Hamilton. Ran Stockcars for a short period in 1950's

Tokoroa Speedway          Can anyone help with info on that track?

Warkworth Speedway        It was running in about 1990 for two seasons. Can anyone supply more info?

(more coming soon, any help you can give with details would be greatly appreciated and acknowledged)

Please note this site is subject to copyright © laws and use of any info or graphics
without the webmasters permission is not allowed.
Every effort has been made to trace copyright holders of photo's or text used.
The webmaster would appreciate hearing from any copyright holder not acknowledged.